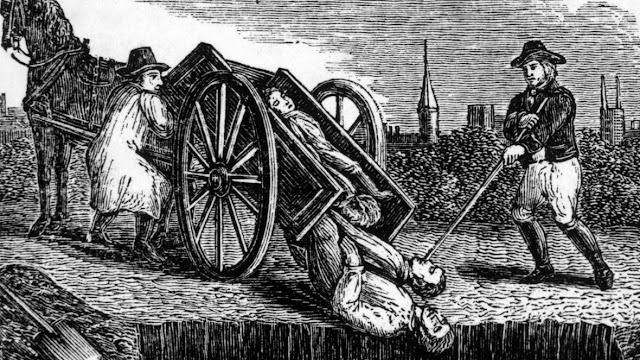 1349 was the year that The Black Death reached Yorkshire. By that time, the deadly plague that had spread around Europe and Asia was progressing via  aerosol infection - human to human - rather like COVID 19. People were dying like flies. There were no vaccination programmes and hardly anybody wore masks. It was thought that the plague was being spread by rats or fleas that lived  on their fur but such theories were redundant for, no matter how it began,  it was now riding on the exhaled breaths of infected people.

The population of England in 1348 was an estimated  4.8 million. Three years later in 1351 it had fallen to 2.6 million  Can you imagine that?  In such a very short time our population had been reduced by half. Families were decimated. Whole towns and villages were emptied. Graveyards were filled to overflowing. Death was everywhere making our current pandemic seem like a walk in the park.  It was the same in France, Germany, Italy and Spain. In fact every European country felt  the terrible shadow of The Black Death.

Early in 1349, the population of prosperous Norway was probably 400,000. In the summer of that year, The Great Pestilence was imported from England and it spread like wildfire killing half the population in just two years. Afterwards, it took three hundred years for Norway's population to return to pre-plague levels. In the intervening years, the proud and independent country had become part of the wider Danish empire - subjugated and beholden to the Danish parliament in Copenhagen.

In Yorkshire, priests who sought to comfort grieving families themselves became very susceptible to The Black Death. They died in such numbers that many churches were without presiding priests for years after the pandemic had subsided.

The people who lived or died in 1349 were just like us. They had hopes and dreams and memories. They laughed and they cried. They shivered and they sweated. Try as I might I simply cannot imagine what daily life must have been like as the Christmastime of 1349 approached.  Who would attend the annual feasting and who would be left to even prepare the feasts? Fear must have throbbed in every heart. Maybe folk wondered why God was allowing the slaughter to continue and was he even there at all?

1349... a momentous year. One that should never have been forgotten. I think I will say more about The Black Death tomorrow.  To me at least, it was a fascinating period in our history.