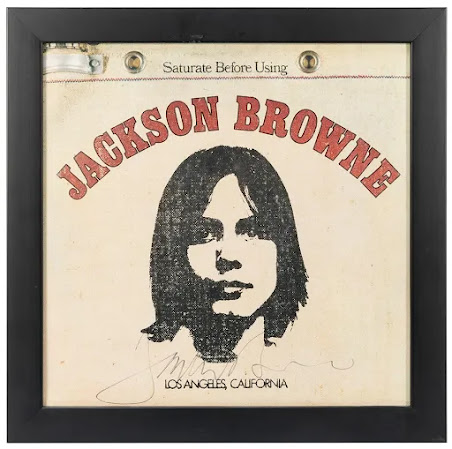 Jackson Browne's very first album, sometimes known as "Saturate Before Using", reached the shores of this island  in 1972 . My younger brother Simon suggested that I should listen to it and I was immediately entranced. Jackson's plaintive voice, his musicality and his poetic lyrics grabbed me straight away.
He has released fourteen more albums since then and I have twelve of them. With Simon, I finally got to see Jackson in concert at Sheffield City Hall in March 2009 and we were not disappointed. It was a fabulous concert from a guy who has now been there in the background of my life for almost fifty years.
One of the songs from the first album that has haunted me forever is "Song for Adam". I know every word and I just have to close my eyes to hear the recording. No need for a turntable, a CD player or headphones connected to a phone. I just go to the music library in my head and there it is, complete and sweet.
It is not about love, seeking love or losing love as many pop songs are. Instead, it's about friendship, memory, loss and puzzlement. It was inspired by news of the death of  a Californian contemporary - Adam Saylor who travelled to India in the late sixties and died in the street below his hotel window. Did he jump or did he just fall? Nobody knows for sure though back in 2017, Saylor's father Dr John Saylor seemed pretty sure that it was suicide:
“He wound up in Bombay – Mumbai, now, it’s called. After a while, I think he got depressed. He wrote to me that he wanted to come back home, but he didn’t have any money. His girlfriend had gone back home, and he was stuck there.
So I sent him $600 for air fare, and a couple of weeks later I got another letter asking if I’d seen his note about wanting to come home, and asking for money. So, I sent him another $600, and I got a third letter wondering why I hadn’t responded. And just before Christmas, he jumped from the fourth floor of his apartment.
Someone had intercepted the letters and forged his signature on the checks. Adam never got them. I’m sure he was depressed, and he thought I had abandoned him."
Of course, there's a sense in which that background doesn't really matter. "Song for Adam" is a human song that most people can relate to without knowing any of the back story. Here it is with the opening lyrics so that you can sing along:-
Though Adam was a friend of mine, I did not know him well
He was alone into his distance, he was deep into his well
I could guess what he was laughing at, but I couldn't really tell
Now the story's told that Adam jumped, but I've been thinking that he fell
Together we went travelling, as we received the call
His destination India and I had none at all
Well, I still remember laughing with our backs against the wall
So free of fear, we never thought that one of us might fall
I sit before my only candle
But it's so little light to find my way
Now this story unfolds before my candle
Which is shorter every hour as it reaches for the day
But I feel just like a candle in a way
I guess I'll get there, but I wouldn't say for sure...
- January 25, 2022