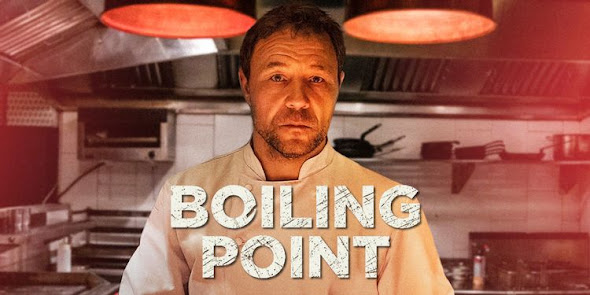 "Boiling Point"  is a drama and not a documentary. Released just before Christmas, this British film is set in a busy upmarket London restaurant with the central focus being Andy Jones, the head chef and part-owner of the establishment played by the brilliant Stephen Graham.

Written and directed by Philip Barantini who just happens to have much personal experience of working in restaurants, the film is very special in the sense that it consists of one continuous ninety minute take. There's no splicing or cutting to other cameras. It's just one camera roving around the restaurant, sometimes following Andy Jones or taking us to tables where demanding diners are seated.

In this sense it does have some of  the characteristics of documentary film making. However, as I said at the beginning "Boiling Point" is a drama. It was carefully scripted and carefully rehearsed  to give the impression of reality unfolding before our eyes. Stuff happens including angry tensions between the kitchen staff and front of house and the unwelcome visits of a top food critic and laddish social influencers who demand steaks even though steak is not on the menu.

It would be interesting to tune into what really happens behind the scenes in upmarket restaurants. I would like to think that most eateries are far more harmonious, orderly and much less dramatic than in the story that unfolded at "Jones & Sons" on that particular Mad Friday before Christmas.

On this grey day, I caught a bus into the city centre to watch the film on a big screen. Seeing good films on a television set in one's own home is just not the same. It is more enthralling to sit in a comfortable cinema seat in darkness with surround sound and full concentration. "Boiling Point" was well worth the effort.