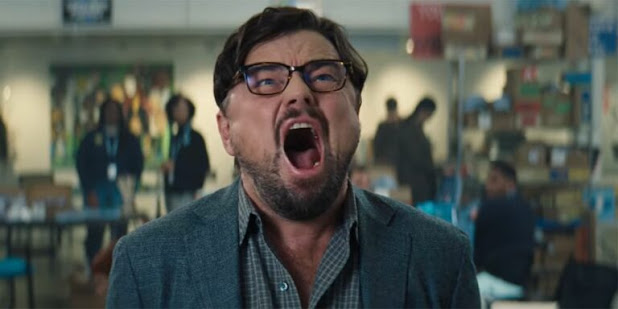 Leonardo DiCaprio as Professor Randall Mindy in "Don't Look Up"

I didn't read any reviews before watching "Don't Look Up" on Netflix last night. It was written and directed by Adam McKay with starring roles from Leonardo DiCaprio and Jennifer Lawrence. Significant supporting roles were played by Meryl Streep, Cate Blanchett and Mark Rylance. The running time was 2hrs 25mins.

It seemed to me that the film didn't take itself too seriously. Central to it is the idea that a large comet is about to strike Earth with a power akin to the Chicxulub event on the Yucatan Peninsula sixty six million years ago. That was the collision that wiped out the dinosaurs and utterly changed  this planet's evolution. Not a light-hearted topic I am sure you would agree but in the hands of Adam McKay and his troupe, the horrific vision is sheathed in a lot of dark humour. There's a kind of balance going on.

I liked the modernity of the film which pictures the world we inhabit as a place where social media and popularity matter more than impending doom or truth. Random Instagram images flash by at times - especially as humanity careers to the inevitable ending.

Leonardo DiCaprio and Jennifer Lawrence's characters have a message that they need to give to the world but nobody wants to listen - not even The President of the USA who appears like a female version of Trump, self-obsessed and divorced from reality.

I enjoyed "Don't Look Up". It was fun but with some serious questions buried in there too. I hope that I haven't given too much away here...

Kate Dibaisky: Are we really about to tell the President of the United States
that we have just over six months until humankind, basically every species
is completely extinct?
- January 22, 2022