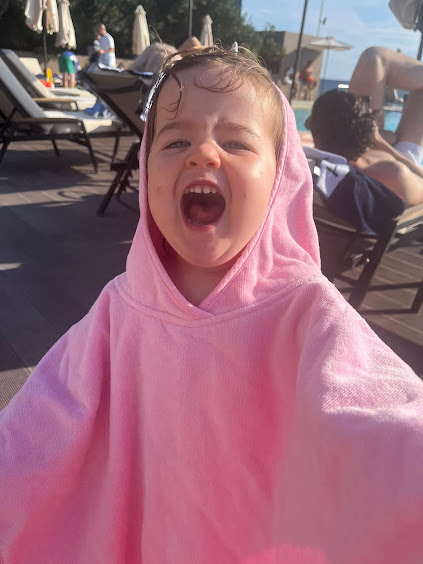 Phoebe in Corfu this afternoon
Oh, we have been missing our little granddaughter Phoebe. While we were away on The Furness Peninsula, she was on the island of Corfu in Greece. Yesterday, she even went on a trip to Albania - somewhere I have never been. It's very close to Corfu - just across The Straits of Corfu, sometimes known as The Corfu Channel. She will be back in Merrie Olde Englande on Tuesday.
Phoebe's language skills improve with each passing day so after twelve days of not seeing her we are expecting to be surprised. Beforehand it was mostly single words like "dog", "cat"", "mama" and "dada". She also said "Out!" when wanting out of her high chair and "Yes!" with a nodding head when asked, "Phoebe, would you like a yoghurt?"
It has been such a delight to observe the development of her communication skills but I feel some regret that, try as I might, I just cannot remember the evolution of my own children's speech. It's like it just happened.
However, I do remember a journey back from Shirley's parents' farm in Lincolnshire. Ian was abut eighteen months old and he started to "sing" in the back of the car - mouthing the notes of " Frère Jacques" which was the tune that his plastic duck played when you pulled the string in his cot. Ian had heard it many times. Shirley and I just looked at each other. It was a real milestone in his development.
We won't see Phoebe till Wednesday. I wonder if she will remember us. Maybe she will talk about her trip to Albania or show keenness to discuss the two comedians we have at the top of the British government now - Truss and Kwarteng. Sounds like a demolition company. Oh Lord, save our souls!
- September 25, 2022