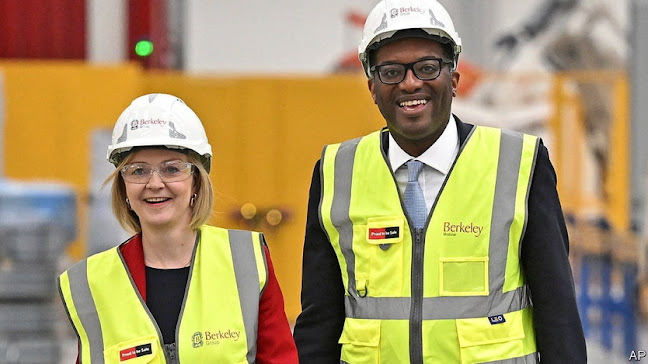 I freely admit that I am rather ignorant when it comes to economics. The subject tends to make me glaze over. It's not how my brain works. Give me history, art, geography and poetry any day. These are subjects that get me buzzing but economics leaves me floundering like a jelly fish on a beach. Generally, I leave the zone up to other people.

My country has been in a challenging position for a while - what with The Brexit Disaster, COVID19 and Putin's war upon Ukraine. Common sense tells me that this was not the time to test out breathtaking economic experiments to boost growth. This was a time for diligence and probity, for trying to get through stormy waters as best as possible.

In the shortest political honeymoon ever,  our new prime minister Liz Truss and her chancellor Kwasi Kwarteng have managed to plunge Britain. into unmitigated disaster like the captain of "The Titanic"

They have been playing poker with citizens' lives on the back of a hunch. Most of us had open mouths when we learnt they were going to cut taxes - especially for the most wealthy. Truss said that she would be happy to make unpopular decisions and that she would "deliver" on her promises.

It was a load of bravado and hot air. Tough talk from a couple of muppets. And now the markets are giving their damning verdict in no uncertain way.

Where is this nightmare going to end? Will Truss and Kwarteng backtrack? Will they resign? All of a sudden The Labour Party looks a better bet, advancing by seventeen points in the polls under Sir Keir Starmer's steady leadership.

If everything goes pear-shaped, Truss and Kwarteng will be fine. They'll have enough personal wealth to survive the worst that the economic weather can throw at them.  However for ordinary citizens , that is not the case. They will have to bear the brunt of the failed experiment It's just like wartime. Leaders make wars but it is ordinary people who have to fight them.