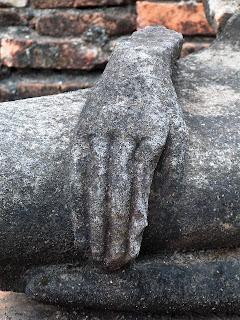 A Buddha's hand in Ayutthaya
I wish instead that I had a picture of Bic to show you but I don't. Like many Thais, he was of Chinese ancestry. He lived beneath my room in the staff quarters. He was one of only two receptionists in my little guesthouse. They tended to work from either seven in the morning till four in the afternoon or from then till one in the morning.
Bic was thirty two. On the Sunday evening before last I bid him good night as I folded the Bangkok Sunday Post but he chased after me, catching me up on the stairs.
"Mr Pud. Mr Pud I go leaving."
"What? You're leaving Bic? When?"
"Tonight. I go tonight."
I couldn't believe it. Bic was my chum. I had taken him out for a couple of meals and in return he'd invited me to a bar where he insisted on returning the favour. He was with Kat who is a receptionist in the adjacent massage parlour. In Chiang Mai I bought Bic a souvenir T-shirt and one day he bought me a blueberry muffin from a nearby bakery. Bic made me laugh and I made him laugh.
"But why Bic? Why are you leaving?"
He looked away self-consciously and paused, wondering what to say and then he announced in his pidgin English, "Me bad sometarm."
I didn't want to push him for I could see that he was close to tears. We shared a manly hug. I put a five hundred baht note in his palm to say "thanks" for his kindness and good humour and we said goodbye.
Since he departed so suddenly, I have tried to find out the truth about why he left and from each witness I get a different story. Had he stolen money? Had he been hitting the bottle? The lady owner - Thida - said she had absolutely no idea why Bic had left. The other receptionist, Leila, said he had resented demeaning criticism from the owners' daughter. A cleaner suggested that he had been having an affair with Kat from the massage parlour. That Sunday night Bic told me he would be going back to his family home in Hua Hin but a couple of days ago Leila said he had moved in with Kat who is married with two children.
Sometarm the truth is as elusive as a dream that steals away with the dawn. Perhaps I will never know why Bic left.
I remember one night, not long after I arrived in Thailand when Bic confided in me that he was still broken-hearted about the ending of his most significant love affair. It had lasted seven years - he said - and he still thought of that woman every hour of every day even though they had been parted for some three years. He said he had never told anybody about his utter distress before and I said he needed to "move on" but I didn't mean literally.
Like atoms on the move randomly colliding, we never know whose paths we will cross. Bic was just somebody I met along the way. People come and people go. What more is there to say?
- May 11, 2011