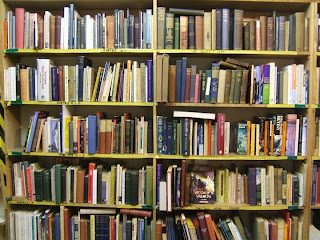 Just managed to get back from the school before Bangkok's leaden skies opened. I had stayed late working on the children's poetry collection I am compiling. It is going to be called "Where East Meets West" which is also the school's motto. In one way I want it to be like a parting gift though of course its main aim is to encourage and celebrate good writing. Writing poetry isn't easy at the best of times so I feel heartened that a lot of children - nearly all Thais - have given it a go. Perhaps in some future post I will share a couple of their poems.
At four twenty, after the computer network had automatically and irritatingly shut down as usual and as I was waiting to log straight back on, I found myself writing a poem of my own. Lord knows where the idea came from. I am imagining this poem right in the middle of a hefty collection and it's as if the poem itself is speaking to the onlooker who has arrived at that particular page. (By the way, water is now coming down in gallons as I write and the electricity just went off for a moment. Thunder. Lightning. Buddha's not happy!)
I guess there are many poems in many dusty anthologies that get overlooked simply because they happen to be located somewhere in the middle of the book. Also, I like the idea of playing with poetry so that this poem has its own voice, its own way of looking at things as it tries to jump off the paper to communicate with the detached reader who happens to have flicked to that page. Here it is:-
Page 53
Sandwiched in the middle
Of this collection
I'm shadowed by the weighty poems around me
Idle readers who flick through poetry books
Or peruse the shelves
Hardly ever reach the centre
Where I've been hiding
Safe in the certainty
That no one would ever find me
Or recognise
My unusually stark style
That is
Dear reader
Till you came along
And spoilt it all...
So now
Speaking as a recently unearthed poem
Now that my secret is out
I feel I ought to say
Something of note
Like the middle is half way
So that's what I just wrote.
- May 25, 2011