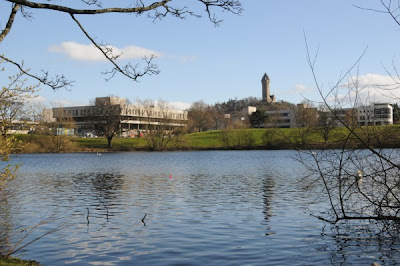 Life. It can be so strange. Accidental moments may colour your entire life. I don't know why but I have thought about Pat in the last few days.
Who was Pat? She was a Scottish woman I had a steady relationship with in my last months at university. Thirty five years ago. She cooked meals for me and loved me. We were good together. She quietened some of my wildness. Showed me how to relax with people and be less combative. We danced. We visited Glasgow and Edinburgh and she sat by my side when I drove the students' union minibus all the way down to London for a political demonstration. She so much wanted to please me. She would ask my opinions about her clothes and make-up - stuff I never really cared two hoots about. I met her parents and her sister. Stayed in her family home. Got drunk with her. We talked and talked and woke together in many silver-grey dawns. That was Pat.
At Christmastime of 1977, I moved back to England to embark on my momentous teaching "career" (ha!). I was in a vast, tough comprehensive school in a godforsaken South Yorkshire mining village. Those first weeks were the hardest apprenticeship ever. I could sink to the bottom of the sea or I could swim. I chose to swim. And one of the things that kept me afloat was my growing love and affection for Pat. I couldn't wait to see her at February half-term.
Back in Scotland I returned to her. Less than two months had passed. I wanted her love and friendship to soothe my battered soul. I reached for her but she shut me out. The door was closed literally and metaphorically. I tried to get in but she was having none of it. There was no explanation just exclusion. She was lost to me as if those golden months before had never really happened. I never saw her again. It was a puzzle.
At Christmastime 1979, I met my Shirley. Before the winter of 1981 we were married. We had a mortgage and bills to pay. We were in love. We pedalled the treadmill of work before our babies came. A son and a daughter. Perfect. And then there were the other two we never met - the ectopic might-have-been children who got away like fish we failed to land. I think of them too. So I almost forgot Pat.
Some time in 2001 Pat got in touch with me again through the machinations of the Internet and I asked her - why. Why did you shut me out all those years back? And she told me a mutual "friend" called Andy, who by the way had always had a "thing" for Pat, reported that I had said to him I would never spend my life with her because she was too flat-chested! I emailed back that I had absolutely no memory of saying such a horribly shallow thing but if I did say it then I apologised wholeheartedly - even if it was over twenty years too late.
Pat became a lecturer in a further education college in Scotland. She never married or bore any children and now she lives in her own little apartment in the suburbs of Glasgow having retired from her college just last summer.
After ten years I realise that I never did say such a thing about her. I liked Pat fine the way she was. She was pretty and I respected her. I realise that it was just Andy mischief-making. Spoiling something good that he didn't have. Perhaps he was drunk. Perhaps he was making a play for Pat in my absence. Anyway. It meant that the course of my life and Pat's life changed for good. I believe we'd have been together. We'd have made a home and a family. But it wasn't to be. I went my way and she went hers. I think that it's called the randomness of being.
- May 19, 2011