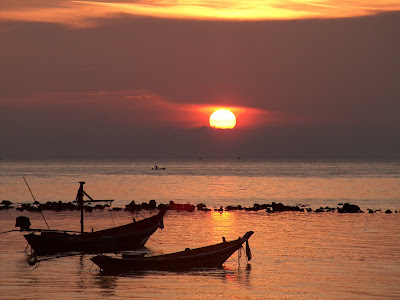 Haad Salad Sunset
Phangan is famous for its "full moon parties" - Bacchanalian beach raves in the far south eastern corner of the island. These events attract backpackers and latter day hippies by the score. So naturally, I booked accommodation at the opposite end of the island in Haad Salat - Salad Bay. And how lovely it was there. I had a spacious wooden bungalow to myself with a view from my wide wooden verandah that took in both the little hotel complex's pristine oval-shaped pool and a beautiful palm-fringed beach with the bay beyond. There little fishing boats bobbed colourfully.
On Sunday I went on a snorkelling trip which allowed me two hours on beautiful Bottle Beach. Yesterday I hired a bicycle and cycled till heat exhaustion, dehydration and excessive sweating threatened to do me in for good. It's true what they say about mad dogs and Englishmen. I recovered in the main town - Thong Sala, downing three bottles of soda water in a row before cycling up the west coast to an enclosed fresh water lagoon. On the way I passed a bizarre English pub - "The Masons' Arms". It looked as if it had been transported directly from the Home Counties.
This morning I had an hour long foot massage from a young lady called Non whose service involved both pain and relaxation. It made me think that to really benefit from Thai massage one would need to make it a regular feature of one's life. A one-off massage is okay but its benefits are probably not going to be long-lasting.
At Nakhon Si Thammarat Airport, a chubby Thai gentleman with cloudy eyes and a can of Heineken joined me at my lunch table and attempted most unsuccessfully to strike up meaningful conversation as we ate our chosen dishes. But one should never judge a book by its cover for when I attempted to pay my bill, the man insisted that he would settle it. I thanked him and then headed for the departure gate. Acts of human kindness in a world that often appears self-seeking and heartless are like jewels that glisten and ask to be treasured. In Buddhism such acts are often thought to "make merit", counteracting the wrong we all do. 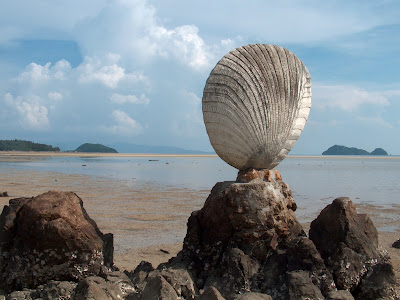 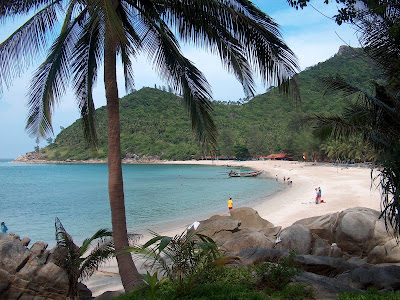