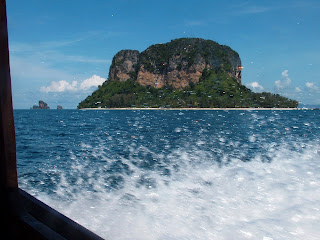 It was dreamlike. Poda I mean. I can't tell you how lovely it was though I guess for some people it would have been like hell on earth.
When I arrived, I discovered that I was the only guest booked into the "resort". So there was me and at least fifteen members of staff. Some day visitors came to snorkel, lounge on the beach or have a meal in the island's only restaurant but they were gone by late afternoon. So effectively I was the King of Poda for the three days I was there.
They call it a "resort" but it's basically thirty "bungalows" and the restaurant. Here are some things the island doesn't have - cars, motorbikes, dogs, roads, a swimming pool, souvenirs for sale, internet, television and electricity (between midnight and 6pm). Here are some things the island does have - coconut palms, monkeys, a curving white coral sand beach, two cats, a few secretive monitor lizards, electricity between 6pm and midnight, blue birds that squawk and a huge lump of limestone "karst" skirted by impenetrable jungle growth.
I walked a path through tropical greenery that led to the southern shore and laid my towel under the shade of an overhanging tree. There I continued to read "Bangkok - A Cultural History" by Maryvelma O'Neil in two long afternoons that were punctuated with swimming and snorkelling sessions in crystal clear waters that were so warm I was never driven out by chilliness. I collected a piece of old rope from the shore and gathered choice bits of white coral in a plastic bag I found in my knapsack. I was planning to make a wind charm. When pieces of coral clunk together they can make musical sounds.
Sadly, even on Poda the detritus of modern day life is visible on the beach from bits of broken fishing net to Coca Cola cans, food cartons and Old "Singha" beer bottles. I scoured my section of the beach and filled a large sack with flotsam and jetsam that I later returned to the dump near the restaurant. On the first afternoon, in six peaceful hours, I only saw two other people on my bit of beach - a couple of American girls in bikinis who congratulated me on my good citizenship.
Back at Bungalow C one of the resort workers - a young man called Bouw - assisted me with my coral knotting as the windcharm took shape. In return he gave me a chunk of his dried squid. He had caught it himself and dried it slowly over a grill. If you find the soles of plimsolls tasty, you'd probably enjoy dried squid. No doubt the British TV chef, Rick Stein would have been in raptures about the stuff. In spite of it, I finished the wind charm and was rather proud of the end result. I tied it to the lamp bracket outside my door and left it to posterity.
On Poda I took various photographs, including some pictures of Sunday's sunrise. I left in the early afternoon on a motorised longtail boat that whizzed me back to Ao Nang on the mainland and I looked back through the salt spray to gorgeous Poda, a tiny place in a turquoise sea that I will never forget - unless of course Alzheimer's creeps up on me! For your curiosity and visual titillation, here are a few of my best snaps:- 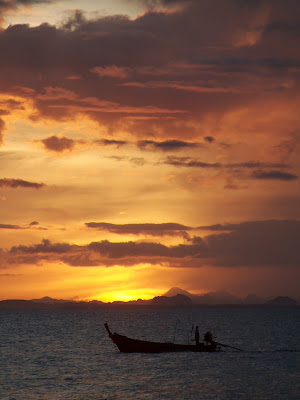 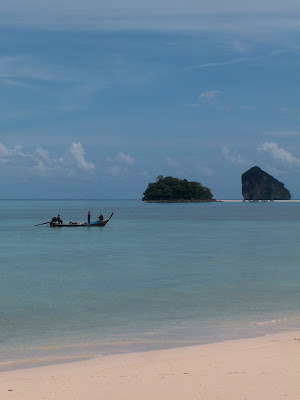 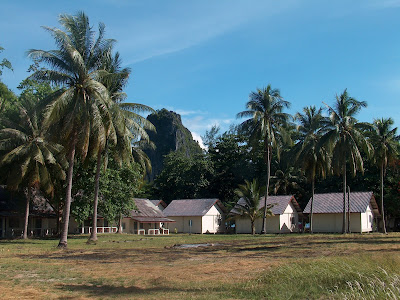 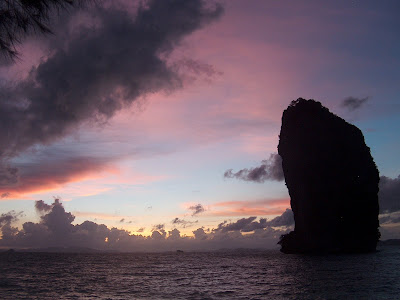