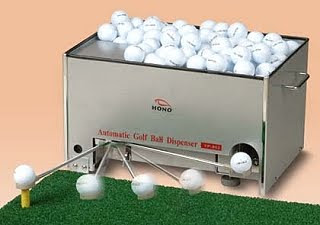 Long-term visitors to this humble blog will be surprised that I am about to post on the subject of golf as it is not an activity that I have ever referred to before. The only golf I had ever played in my life before today was at seaside putting greens or so-called "crazy golf" courses. You know the sort I mean - where you have to take twenty strokes to bash the bloody ball up the ramp to the "crazy" windmill or round the "crazy" U bend to the "crazy" bridge which leads to the "crazy" hole filled with "crazy" gravel and "crazy" cigarette butts. It was enough to drive holidaymakers crazy.
So there I am at the Ratchada golf driving range, fifty metres from my hermit's cave. I am having lunch in the air-conditioned little cafeteria. Fried rice with chicken and mixed vegetables in soy sauce washed down with a bottle of Chang soda water. I watch the golfers whacking balls up the lawn which is two hundred and fifty metres in length and protected by vast nets.
Each golfer has a friend. I'll call it a golfball hopper. It's adjacent to the striking zone. He, or very rarely she, touches a floor button with the club's head and a ball is magically released from the hopper on a metal arm which swings out and deposits its small white globe on to a little patch of artificial grass. The golfer then addresses the ball and, if he is any good, drives it far beyond the hundred metre marker down the range where hundreds of other balls are scattered. The hopper is robotic and magical. We may not be able to prevent famine, AIDS, unrest in Arab nations or greedy bankers' shenanigans but we can create important kit like the automatic golf-ball hopper.
I had thought of it before but today I mustered enough courage to hire a club and two buckets of balls for 150 baht - about £3.10. I was the only farang (foreigner) there and I imagined that the Thai guys would drop their clubs and burst into paroxysms of laughter when they saw my untutored attempts to bash my balls (golf ones!) to kingdom come. As if I was in a sketch from "The Benny Hill Show", many of my balls dribbled pathetically into the nearby gutter and the well-kitted Thai bloke at the next hopper kept looking anxiously across when my balls flashed in front of him instead of soaring outwards.
Nonetheless, I persevered and hit several balls beyond the seventy five metre marker. Sometimes I felt I was trying too hard. It was about the swing and keeping your eyes on the ball. So now I exist near the bottom of golf's world rankings. World number one, Lee Westwood is already looking nervously over his shoulder. Tiger Woods would be doing the same if he wasn't scouting for healthy blonde white girls or writing dramatic self-flagellating confessions for press conferences.
- May 08, 2011