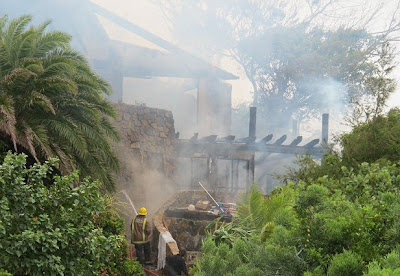 Katherine left the day before yesterday. The emotions I experienced were mixed. On the one hand, I was sorry to lose such an erudite and cultured companion whose muffin making skills are legendary. On the other hand, I was angry as hell that she could up sticks and go without even talking through her rash decision. Women may indeed be good at "multi-tasking" but logic and rational thinking seem beyond them. They're also not much good with TV remote controls and electric drills - unless they wear denim dungarees, favour crewcuts and sport aggressive bulldog expressions most of the time.

I stood on the wharf and waved her off with my Hull City first team shirt. The Burmese workers had formed a little choir. They stood on the wooden Brague Memorial Wharf and sang "Farewell to You My Nancy" as Katherine disappeared into the Andaman sunset.

Feeling as low as a Liberal Democrat activist, I trudged back to the social club for a healing pint of Tetley's. But the Huddersfield v MK Dons League One play-off semi-final was on the big screen and I got hooked, ordering several more pints of the delicious nectar. Staggering out of the social club, instinct drew me not home to Thuza and my big bamboo bed in Pudding Towers but along the sandy jungle path to Aotearoa Villa which was formerly Katherine's home.

We don't have locks in Blogland so I just pushed open her door and went in. There was a huge Mel Gibson poster above Katherine's bed and she had left behind her furry pink carpet slippers. There was some unfinished artwork on her easel - a portrait of a bearded New Zealand-based ornithologist who I know to be a world expert on godwits. In fact, there were numerous godwits in the background of this picture.

On the floor were many screwed up balls of art paper. Cissy scented candles were everywhere - all shapes, sizes and colours - and I found  a big box of "England's Glory" matches on the verandah's wickerwork table...

The next morning Thuza came rushing back into my bedroom where I was suffering from a nasty hangover and a degree of mental confusion.

Leaping out of bed, I wrapped my tiger-print sarong around my middle and trotted along the network of forest paths to Aotearoa Villa. The air was filled with acrid smoke. And as I came through the clearing I saw the disaster in front of me. Blogland only has one fire officer - Ofama and he was trying to douse the still burning embers of Katherine's house with a garden hosepipe.

It was all gone. Everything.

"Me think it candle burning Mr Pud. Must ah set light to all dem papers."

I wandered homewards. A bright yellow bird flashed in front of me as a cloud of rainbow-coloured butterflies settled on the stump of an old palm tree. Through the trees I could see the turquoise expanse of the ocean and in spite of myself I chuckled about the fire at Aotearoa Villa, "That'll teach her!" I repeated under my breath. "If you play with fire you might get burnt!"
- May 17, 2012