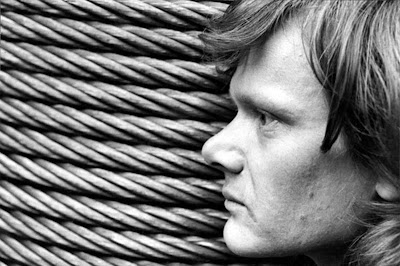 The twin towers of World Trade Centre in New York City rose 417 metres from the surface of the Earth - that's 1368 feet. Of course, when you mention these identical and monumental twins, people's minds immediately go back to the momentous morning of September 11th 2001. But what about a morning twenty seven years before? Wednesday August 7th 1974. On that morning, the determined plans of a French eccentric and his support team finally came to fruition.

Twenty five year old Philippe Petit stepped out onto the thin tightrope wire he had managed to string between the North and South towers. And in a trance-like state of courage and self-belief, he walked across. People looked up from the concourse and the streets below, spotting a tiny and vulnerable figure, seemingly suspended miles above in mid-air.And yes - incredibly - he made it across! But outlandishly, he didn't stop there. He made seven further crossings between the twin towers that morning, once even daring to lie down on the rope as he taunted the waiting New York cops. 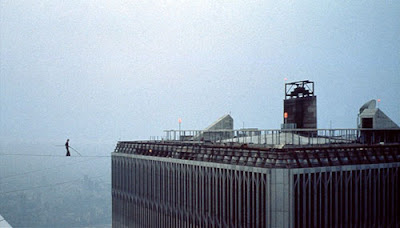 Somehow the destruction of those towers endows Petit's earlier achievement with more value than it had before. The warped terrorists on their ungodly mission represent the darkness that is in men's hearts but it seems to me that what Petit did represented the best of human beings - facing up to an impossible challenge, creative thinking, fulfilling a dream, breaking norms, believing unambiguously in his capabilities and doing it just because he could - just because it was there.

Petit reminds us that life can be so much more than humdrum reality in which our dreams can literally nag us to death. The rest of us may not be high wire performers but there are dreams that we can also realise if we are brave enough - stepping out from safety above the void to reach the other side. I'm not exactly sure what I am saying but seeing "Man on Wire" - that TV documentary film about Petit for the second time the other night, I could hardly stop thinking about what it all meant.
- May 24, 2012