That's our Ian on the right. The men's clothing store he works for just won the prize for "Best Men's Fashion Shop" (2012) in South Yorkshire at the "Exposed" magazine awards. 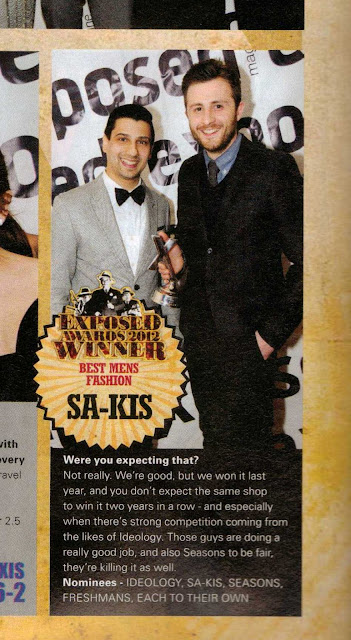 He's worked at "Sa-kis" for seven years but I'm not sure how much longer he'll be there. His girlfriend, Ruby, is just graduating from St Andrew's University and she's keen to move down to London  to work in a media-based company. It looks as though Ian will go with her. Sometimes in life you have to stop weighing things up and just go for it.


Shirley and I  are very lucky to have two such wonderful children. They are both decent, hard-working and kind. They love life and the treasures that it has to offer.

Frances has been in Leeds for nine months now, learning what it is to be a recruitment consultant in a high pressure company with ambitious targets. She's been renting a little one bedroom flat next to the River Aire but may soon be moving into a much bigger Leeds flat with Alex - one of Ian's former school friends. It should save her a good bit of money each month.

I miss both of them terribly and hope one day they will come over to Blogland to see their old man.
- May 03, 2012