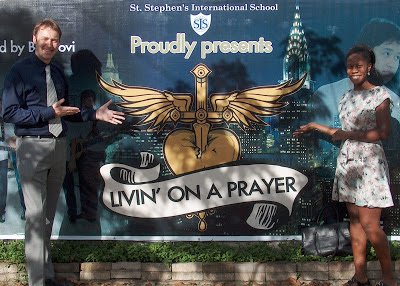 Go east young man! Yes dear readers, as one or two sleuths had already figured out, I shall soon return to Thailand. In the picture above you can see Gordon and Penelope (not their real names). They have been working in Bangkok for three and a half years following their lavish society wedding in Birmingham. And the good news is folks that after some delay and uncertainty, they are to have a baby girl during the Christmas period. Shirley and I are delighted for them.

Unlike many babies in the animal world, human babies demand a lot of attention. Their plaintive cries mean. "Gimme food!", "I'm too hot you suckers!", "I have dumped in this nappy so change it! Now!",  "I demand a drink this instant!" or "I'm feeling lonely so cuddle me!" Unfortunately Miss Penelope could not contemplate responding to her new baby's needs while teaching classes of adolescents from northern Bangkok's wealthier homes. In short, she needed maternity leave. But who could cover her weeks away? Gordon contemplated this question for about five seconds before a brainwave hit him - "I know what I'll do, I'll call for SuperPudding!"

And even though SuperPudding's life was packed with important activity - such as shopping at "Lidl", going for country walks, presenting Lady Pudding with delicious and nutritious meals, emulsioning the kitchen, reading "Black Diamonds" by Catherine Bailey and regularly leaving erudite and witty comments on several blogs, he decided to answer Gordon's call in the affirmative. That is why I was in Hull on Wednesday, getting my £60 Thai work visa. I shall be leaving on a jet plane on January 3rd - assuming Manchester Airport isn't obscured by a snowstorm that day.

When last I was in Thailand and neighbouring countries, I saw such wonderful things and created many vivid memories. Teaching in the school was so delightful compared with the pressurised hurly burly of teaching in a tough north Sheffield secondary school. It felt like a therapy - reminding me of how fulfilling teaching can be and why I ever took up this challenging occupation in the first place. To be trusted. To be king of your own classroom. No jitters about the impending arrival of the bogeymen from OFSTED. No laboured hours preparing "evidence" in the form of spreadsheets, appraisals, professional development folders, observational logs, percentages to prove your worth.

I was more hesitant about going this time - a "Been there, done that" feeling but in the end I am glad to be  able to help Gordon and Penelope out and at my age - sixty next year - it is possible that I'll never have another temporary teaching opportunity like this one. Sometimes you just have to go with the flow. And who knows if Gordon's next job is in Kuala Lumpur, Malaysia I may be required to cover a second maternity leave!