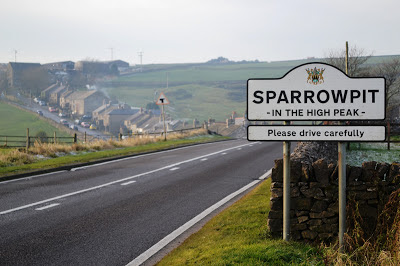 Sparrowpit? An unusual name for a village but I understand that it is a name derived from the now defunct  local fluorspar mining - spar row pit.  It sits in the High Peak overlooking Rushup Vale and seems to possess a different, harsher climate than the one we are used to in Sheffield. For example, yesterday I left my adopted city when it was bathed in bright November sunshine - the sky was blue and the grass was green - but by Sparrowpit the earth was clad in swirling mist, low-lying clouds and the fields were frosted white.

Fortunately, as I parked the car and squeezed into my walking boots, the thick mist in the high valley started to clear and pale images of faraway farms were revealed. But as I walked up to Rushup Edge and then down to Stonyford along an ancient packhorse track, tongues of  the grey-whiteness returned.

Along to Maglow Farm then down to Bagshaw and Blackbrook, huffing and puffing up the hill above Barmoor Clough to wide sheep pastures and then onwards towards Bolt Edge and Barmoor where at High Barmoor Farm I encountered a farmer who I would love to have photographed given his dress sense. Helpfully, he guided me through the farmyard from where the little used public footpath strikes out. His face was reddened and gnarled by sixty High Peak winters and if he had been modelling for an alternative men's fashion magazine you'd have seen a collarless grey striped shirt, a holey lime green V-necked sweater, a padded overshirt - two sizes two big - in Royal Stewart tartan, khaki trews with a baling string belt, wellington boots with turnover tops - coated in cow shit and on his unkempt mop of greying hair a black beanie hat at a jaunty angle. Eat your heart out Giorgio Armani!

And then over the fields past madly barking dogs - "They'll not hurt you love!". Oh yeah! And then passing the sad wreckage of a tumbledown farmhouse on the eastern side of Sparrowpit. A lovely three hour walk made more interesting by the flirtatious November mists.