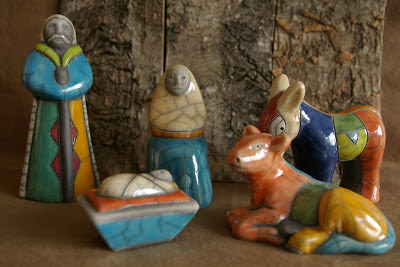 Christmas Eve, and twelve of the clock.
"Now they are all on their knees,"
An elder said as we sat in a flock
By the embers in hearthside ease.

We pictured the meek mild creatures where
They dwelt in their strawy pen,
Nor did it occur to one of us there
To doubt they were kneeling then.

So fair a fancy few would weave
In these years! Yet, I feel,
If someone said on Christmas Eve,
"Come; see the oxen kneel

"In the lonely barton by yonder coomb
Our childhood used to know,"
I should go with him in the gloom,
Hoping it might be so.

The legend that cattle – descendants of the beasts that knelt in reverence at the stable in Bethlehem – would kneel each Christmas Eve at midnight was familiar to Hardy from childhood. This poem was written as the horror of World War One was really starting to be unveiled. One of his distant relatives was killed at Gallipoli that year.

The poem hints at Hardy's uncomfortable relationship with religion. The church had been important to him throughout his life. He wanted to believe and yet logic and a sense of our universe's great godless emptiness kept deepening his instinctive atheism. A "barton" was perhaps a barley enclosure and a "coomb" was a - short chalky valley - both familiar Wessex terms.
- December 23, 2012