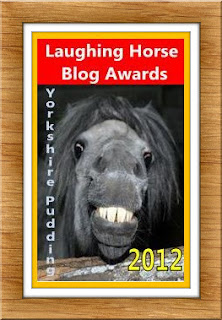 Oh my aching head! Talk about the day after the night before. I haven't had so much to drink since the last Laughing Horse Awards ceremony. The final hour or two are a complete blur in my mind but various nightmarish images keep rising up from the cesspit of my memory. Mr Brague in nothing but a studded leather thong sliding down the hotel bannisters. Jenny and Libby standing on the bar to do a drunken medley of Cheeky Girls songs. Captain Gowans arm wrestling in the lobby with feisty Jan from California and losing! And Helen from "Helsie's Happenings" chasing me round the hotel fountain with my trousers in her hands yelling, "Come to mama ya pommy bastard!"

An ambulance was called to take Ian from "The Owl Wood" and Senor Brian el Cuttso to hospital because of their over-indulgent drinking. A grinning and sober Ian from "Shooting Parrots" played his ukelele on the staircase - old George Formby numbers which were much appreciated by starry-eyed Daphne, Elizabeth and Earl Gray who sat in awe on the carpeted steps beneath him. Steve - once of  "Occupied Country" and Arctic Fox - out briefly on parole from HMP Armley - fought in the car park with Olaf the Swedish barman and a couple of  Saudi Arabian bloggers before the outraged French hotel manager intervened.
Oh my Lord - what a night! Anyway, let's backtrack to earlier in the evening when the awards were announced  - soon after the opening address was given by Hull City's manager Steve Bruce. It was all tuxedos, shimmery evening dresses and polite chortling at that point. And these were the winners...
African blogger of the year - Tom Gowans of "Hippo on the Lawn"
Welsh male blogger of the year - Earl John Gray - creative brains behind "Going Gently"
Wrexham blogger of the year and Welsh female blogger of the year - Jennyta from "Demob Happy Teacher"
Australia's best blogger award (Sponsored by Vegemite) - Helen from "Helsie's Happenings"
Best blogger in Aby Lincolnshire - Ian from "The Owl Wood"
Sexiest lady blogger - Libby from "D-Scribes"
Sexiest male blogger and best research blogger - Ian from "Shooting Parrots"
Top Animal Care Blogger and yet again top blogger in Sloughhouse, California - Jan from "Cosumne Gal"
Top Yorkshire blogger (female) - Elizabeth "Well this Int Gettin Ens Fed"
Top Yorkshire blogger (male), Nobel Peace Prize and United Nations Humanitarian Award - Yorkshire Pudding
Best communist theatrical agent blogger from north Leeds - Daphne "My Dad's a Communist"
Catalonia's Premier English Blogger - Brian Cutts of "Tannu Tuva"
Hamilton NZ's best blogger and Top Granddad Blogger - David from "Cimba7200"
Top Senior Blogger and once again Top American Blogger - Robert Brague "Rhymes With Plague"

Winners are entitled to copy and paste this year's designer widget into their own blogs or sidebars:- 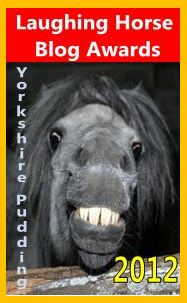 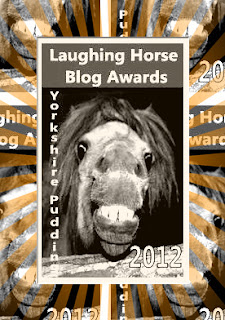 But...drum roll. The Laughing Horse Blogger of the Year for 2012 is.....(pause for heartbeat drumming)...is none other than New Zealand-based blogger Katherine de Chevalle, creator of "The Last Visible Dog"! Hurrah! In their citation, the Awards Committee said, "Katherine's blog provides a healthy mixture of  personal topics, reflections on national and international news items and there is much exploration of wildlife issues, sometimes pausing to celebrate the creatures and the plants she sees around her. Her passion for Art recurs in the blog but her own creativity is never flaunted egotistically. The comments she leaves on other people's blogs are generally warm and encouraging with only occasional glints of her wicked sense of humour. She also makes exceedingly good muffins."  The committee chose to waive objections made by several  Brush-Tailed Possum Support Groups.

In fact, as Katherine weaved her way to the stage past cheering guests to receive her cheque from Steve Bruce, it was obvious that her fur coat was not mink after all but pure NZ brush tailed possum - approximately thirty pelts were used in its manufacture by an Otorohanga fashion house.
What a wonderful way to say goodbye to an old year and to welcome in a new one.
Happy 2013 Everybody! Happy New Year!
- December 31, 2012