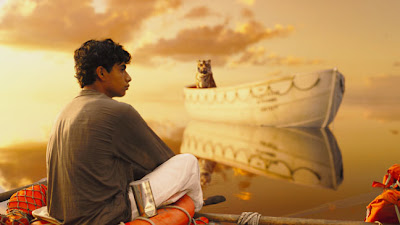 Yesterday afternoon, Shirley, Frances and I went to see the 3D version of "Life of Pi" directed by Ang Lee and starring Suraj Sharma as "Pi" Patel. Shirley had read the novel  by Yann Martel  some time ago but Frances and I didn't know quite what to expect.

The middle hour of the film has "Pi" out at sea in the company of a Bengal tiger called, rather bizarrely,  Richard Parker. This hour was quite sublime - both visually and in terms of the surreal experience it created. The 3D effects did not enslave the director's intentions, as arguably happened with "Avatar", but instead served or enhanced the cinematographic fantasy. Some of it was quite stunning and I found myself lost in the spectacle.

Did Pi dream it all? Was it truth or illusion? In the end it doesn't really matter. There was something vaguely spiritual about it all but if there was a religious message it certainly wasn't shoved roughly down your throat. At times there's a lightness, a deliberate silliness about "Life of Pi" and it is very likely the best film I have seen this year. It was breaking boundaries and Shirley said it truly did justice to a novel she had very much enjoyed. All three of us walked out of the cinema feeling we had just watched something rather special and uplifting.
- December 29, 2012