It was back in the nineteen twenties that the expression "to go over like a lead balloon" was born in an American cartoon strip. After absorbing this expression, the English soon altered it to the slightly more logical"to go down like a lead balloon".  We use it to describe enterprises, ideas or jokes that have in effect failed - like balloons that cannot fly.

It appears that my last post went down like a lead balloon in some quarters. Funny that. When I wrote it I simply assumed that visitors would immediately latch on to the format, recognising that it was all tongue in cheek and that they would reply with their own exaggerated, comical and imaginary notions of what real poverty means. It was meant to be a funny game. I am sure that most other British people are familiar with this routine.

This is not to say that in any way I was mocking the poor or deriding the effects of genuine poverty. Not at all. And I am sorry for any accidental misunderstanding or offence that may have been caused. It just goes to show that even though 99% of the people I encounter in the blogosphere claim English as their first language, there may sometimes be communication breakdowns caused by subtle cultural differences.

Perhaps I'd have been on safer ground relating yet another countryside ramble such as the one I enjoyed yesterday - plodding out of the North Nottinghamshire market town of Retford into the lanes and villages that lie to the east of it and the wetlands that surround the River Idle. Ten miles of plodding that finished with a pint of bitter shandy in "The Packet Inn" on Grove Lane:- 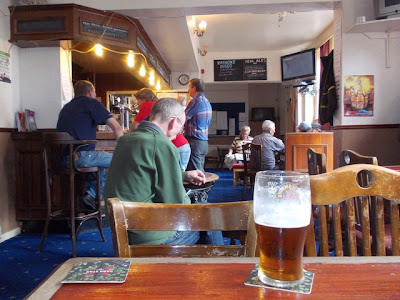 And that pint you see on my table went down like... like Martin Luther King's "I have a dream speech" - delivered fifty years ago this month.
- August 24, 2013