On summery July 15th, I was walking near Ringinglow, along  little used Bassett Lane when a strange vehicle came into view. It was a Google Streetview car. As I happened to have my trusty camera in hand, I took this photograph of it:- 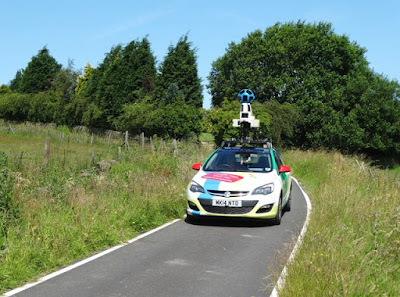 The driver could hardly stop to complain as Streetview has gathered mountains of imagery without seeking permission to do so. I blogged about that little ramble here.

I imagined that in the weeks that followed, Google would update their imagery for little Bassett Lane and that the world would suddenly see a muscular Brad Pitt lookalike standing on the verge with camera pointed. However, that update has not happened. Perhaps they lost the film. Perhaps the editors saw me and immediately censored the car's footage fearing that it might frighten small children.

After curling past Bassett Farm, Bassett Lane meets Andwell Lane near Green House Farm and just yesterday I discovered that Google Streetview did indeed update some of the imagery that was gathered that sunny morning. Andy Warhol said that everyone would enjoy  fifteen minutes of fame, so drum roll please, snipped from Google Streetview, this is my moment:- 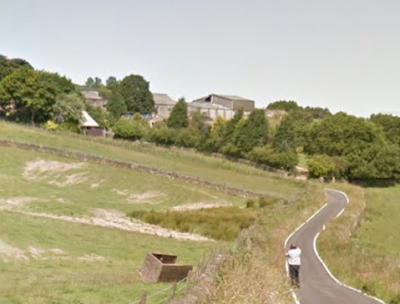 Caught in the act of taking a picture of nearby Bassett Cottages with Bassett Farm's buildings clustered amidst those trees. I guess that that is what I have become - a tiny little man, moving over the landscape like an ant but now surely an ant with credibility thanks to Google Streetview. Fame at last!
- November 10, 2015