Yesterday, Borehamwood was my oyster as Shirley attended the "Strictly Come Dancing" final. I had planned a country walk but had not anticipated fog. What the hell - I donned my boots anyway.

On this country walk, I found myself chatting with three people I met.There was a seventy something farmer at Summerswood Farm. We talked about country paths, dairy farming, horses. and the volume of traffic on the A1 which bisects his acres.

In the village of Ridge, in "The Old Guinea" I met a tattooed Serbian barman who supports Tottenham Hotspur. We talked about football and Serbia and the village of Ridge. The pub's current character is very different from how it must have been in the past. It has transmogrified into an Italian eating house, specialising in stone-baked pizzas. No longer farmers in mucky wellies and tradesmen propping up the bar and chewing the cud over a pint or two.
The third person I met was a tall woman with blonde dreadlocks and a gold stud in her nose. She was called Debbie and she was dog walking for an elderly couple. It turns out that she was born within six weeks of my birth in 1953. In some respects we have seen the same world unfolding as we grew up and grew older. She said several things - amongst them - "Isn't Hertfordshire a brilliant county for walking in?"

Diplomatically, I retorted, "All English counties are great for walking in."

She had a sunny disposition in spite of arthritic joints. She summarised our parallel lives with this - "Don't you think we are damned lucky to  live in England? It's a bloody brilliant country."

And of course I agreed before bidding her farewell and carrying on with my foggy Hertfordshire ramble. It may be a great county for rambling in - when you can actually see it! 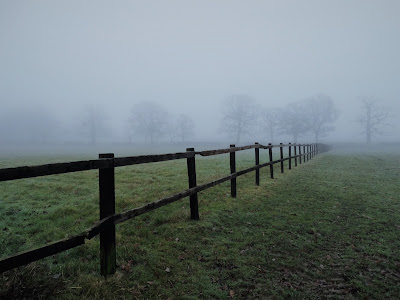 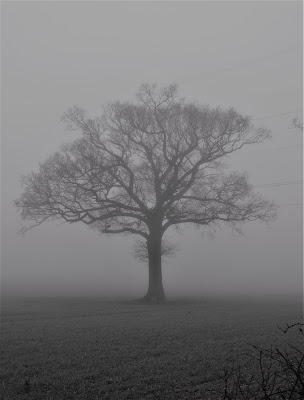