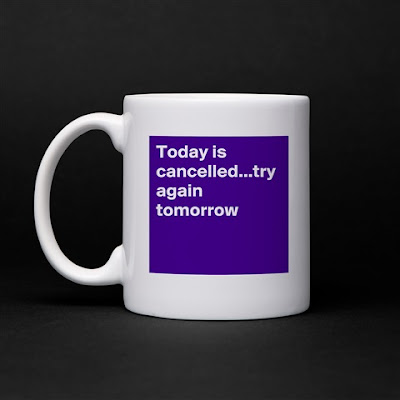 Today is cancelled. It's just gone midnight and I am away to bed but I will be up again at 5.45am ready to drive down to my allocated polling station. I will be there until 10.15pm working as a poll clerk at the European Union Parliamentary Election.

Britain voted to leave The European Union in June 2016 but we still haven't left and so the country is obliged to participate in these elections. The whole thing is an utter mess and as time goes on one wonders where our confused politics will lead and how we can ever return to a state of political normalcy.

The thing seems broken and who can possibly fix it? The hapless Theresa May seems destined to resign in the next few days and her right-hand woman - Andrea Leadsom has already resigned as Leader of the House of Commons. Perhaps she intends to go for the top job but she is as unimpressive as the other candidates plotting leadership bids. In my opinion, the worst of these is the bumbling Boris Johnson - currently the bookies' favourite. The guy is a clown and a liar to boot. He was the worst Foreign Secretary ever to occupy that high office.

Brexit is like a death wish. We should never have been asked the simplistic Leave/Remain question in the first place. Ignorant people now grumble: "Just get on with it" or "We voted leave so we should leave". They seem to disregard the complicated ramifications of this misguided decision and fail to appreciate the benefits of European unity,

And so today, still in Europe, we vote for candidates and parties who may never take up their seats in Brussels or Strasbourg. You couldn't make this up. I will intersperse the hours at the polling station with cheese and tomato sandwiches, bananas, mugs of tea and biscuits as voters drift in to put their crosses in the various meaningless boxes. It's called Democracy.
- May 23, 2019