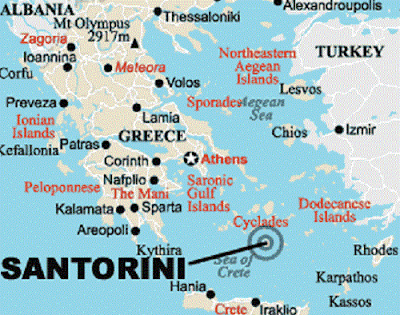 The last time I was on Santorini, I went into a busy taverna and sat at a small table looking east across the sea. The menu was written in Greek. I asked a young waiter to help me with the menu. His English was as good as my Greek.

What's this? What's this? Is it fish? Is this dolmades? What's this? Is this Greek salad? It was quite a struggle but in the end my order was placed and I waited for the meal to arrive as I consumed an ice cold beer.
After twenty minutes my food arrived. Very quickly it became clear that there had been a communication breakdown with the young waiter. Instead of the simple meal of rice with kleftiko and a stuffed tomato that I had been expecting, various other plates arrived. There was a grilled fish, a chicken stew, a plate of french fries, a wedge of moussaka and a Greek salad. My little table could not accommodate all the food.

There was enough there to feed a family of four. I noticed some other diners looking in my direction as if to say, "Look at Mr Greedy over there!"

Back in 1980, it was amazingly cheap to eat out in traditional Greek  tavernas. I could not be bothered to argue my way out of the situation so instead I just tucked in and ate as much as I could.

I slept well on the black sand beach at Perissa that night and in the morning I unzipped my sleeping bag and ran into the sea. It was always a splendid way to wake up and start the day when island hopping around Greece in the summer months.

Later today I will be on Santorini once again. It's the first time that Shirley will have been there. It is often said that the huge volcanic explosion that occurred there in ancient times was possibly the source of the myth of Atlantis.
- June 13, 2019