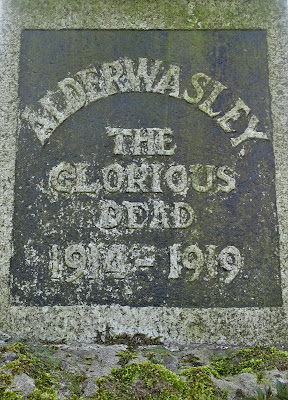 Sunday was a gorgeous day. Spring was in the air and after an initial milkiness the sky above turned sapphire blue. Winter had crept back into its lair - at least for the time being.

With Clint's kind agreement, I headed south out of the city to Baslow and then on through Chatsworth Park, Rowsley and Darley Dale to Matlock. Through Matlock Bath and Cromford before filtering left along  narrow country lanes  that brought me eventually to the small upland village of Alderwasley. 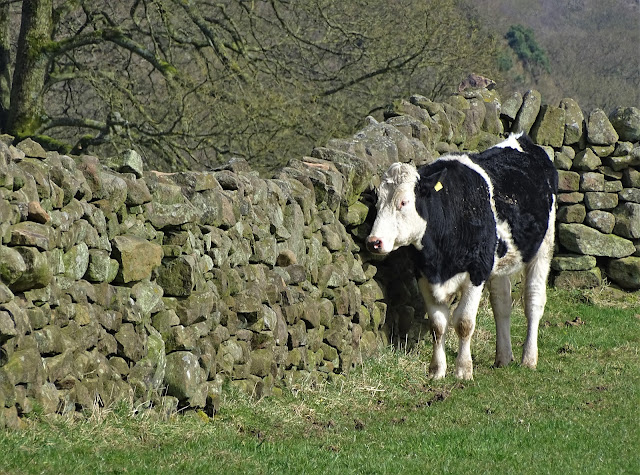 I had never been there before and as I tied my boots I was looking forward to circumnavigating the district. There's nothing I like more than exploring unknown territory,

"You can't park here I tell ya ya daft oaf!" protested Clint.

I had parked in the little village hall car park that I had spotted on Streetview and chose to ignore the sign that said "Village Hall and Cemetery Parking Only". The lanes are so tight in Alderwasley that there seemed to be no alternative.

"Be it on your own head then!"  sneered Clint who has been rather tetchy recently because he needs his annual service.
And so I set off on that crisp spring morning with hardly anybody else about though I did encounter a couple of other walkers in nearby Long Wood. They kept their distance as if  I might be the carrier of something worse than leprosy. "Good morning!" I  smiled as they withdrew into the undergrowth with pained expressions, as if they had seen a ghost. Perhaps I am a ghost. Casper The Friendly Ghost.
Half the walk was through fields and woods and the other half was on lanes like Breamfield Lane where a couple of senior citizens  were sitting on a bench enjoying the view of Wirksworth in the valley below. I also walked along a byway that would surely be popular with most female blog visitors and some male ones too - Knob Lane.
You don't need any more details about my solitary ramble than that. In case you were wondering, there was no note or parking ticket on Clint's windscreen (American: windshield) when I returned to my faithful jalopy.

Driving home via Matlock Bath, I noticed that a couple of hundred motorcyclists had gathered there as they often do on sunny Sundays. Some were eating fish and chips but mostly they were just hanging out, no doubt chatting about the things that motorcyclists usually chat about - horse power, oil, tyres, leather jackets, car drivers and fatal accidents. There was no "self-isolation" going on that I could see. Perhaps I just dreamt about a pandemic.