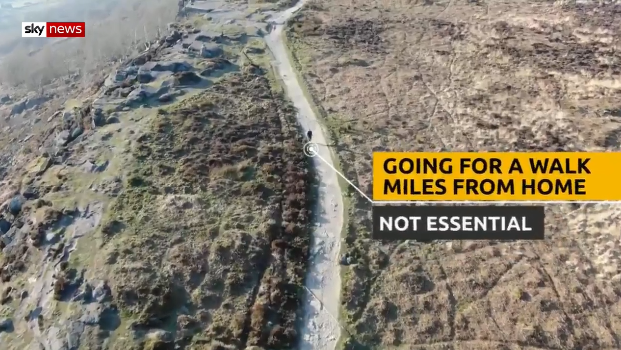 The screenshot above is taken from drone footage by Derbyshire Police. The scene is Curbar Edge  where I have often walked. The film sought to shame several members of the public who were simply out in the sunshine enjoying country walks. As with the targeted fellow above they were all practising social-distancing.

During The Plague, government guidelines say that we can leave our homes to shop for food, visit a pharmacy or medical centre and we can also exercise once a day.

When the guidance first emerged I tried like crazy to clarify the vague guidance about exercise. Could I, for example, travel in my Clintmobile to a remote country location and then get out for a walk? Common sense said that I wouldn't be causing anybody any harm and there'd be  far less chance of infection than say walking down to our local park.

That clarification proved impossible but it seems that Derbyshire Police have placed their own interpretation on the guidance. Their reading is that you cannot  drive into The Peak District for a walk. You can cycle or ride a horse but you cannot drive. They have even been pulling cars over to question drivers and reinforce their interpretation.

The drone footage has caused controversy and further mixed responses have since emerged from government spokespeople. To me it seems that there's an element of petty vindictiveness in all of this. It's as if to say - you are not allowed to have pleasure during The Plague. Why should you be strolling happily on country paths when people are dying? Stay home and suffer like the rest of us!

What does "local" mean anyway? As in "exercise locally"? Is "local" my street, my district, my city, my county, my region? I don't understand.

Last Sunday I drove for an hour to Wirksworth in mid-Derbyshire. I blogged about that day here. During The Plague I was hoping to have a few more days like that but now I have been forced to think again. Big Brother may be watching me and of course nowadays the cops can find out where you live simply by running your car registration number through their computer system.

I will be taking more walks but I'll be choosing my parking locations carefully. By simply parking in a village I believe that I will be thwarting Big Brother. I wonder if the authorities will soon be cranking up their enforcement procedures.

JUDGE We find you guilty of parking in the countryside and going for a walk. Before I send you down is there anything you want to say?
YORKSHIRE PUDDING Yes your honour. I saw a stag by Redcar Brook grazing in the adjacent meadow. He was unaware of my presence and I watched him for ten minutes or more as the brook babbled by. And once I was alone at The Horse Stone with snow all about me and not another soul for miles around. And I am so very, very sorry for my heinous crime against humanity your honour, for donning my boots and walking through the heather, for following my map along unknown paths, for daring to walk in peace during The Plague. I admit it, I am a dirty no-good felon and I deserve to have the full weight of The Law pressed down upon me.
JUDGE Take him down!
- March 29, 2020