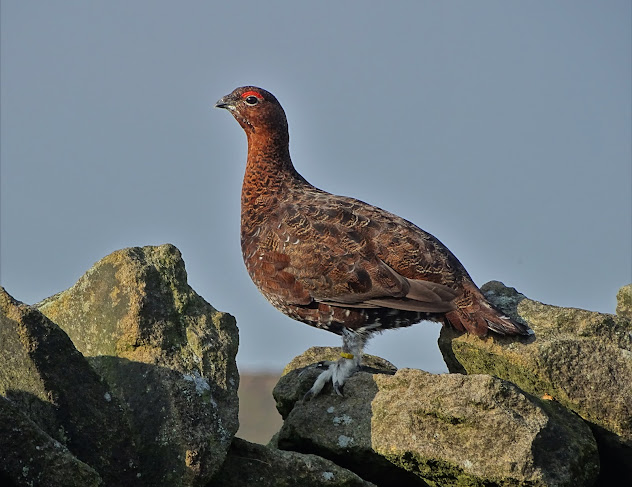 The red grouse is a ground-nesting moorland bird. Standing as tall as a bantam chicken it is unique to the British Isles.

Many is the time that I have been startled by red grouse when rambling on heather-clad moors. The birds rise up making their familiar cackling sound. They are understandably wary of human beings. After all, instead of cherishing this splendid bird,  there is a segment of our society who apparently find pleasure in blasting them out of the sky with their rifles. They call it "sport". The segment to which I refer is  99% male and wealthy. Most grouse killers were educated in private schools and have reactionary political views. Most of them don't even eat the grouse after they have "bagged" them. It is estimated that they kill half a million grouse each shooting season (August 12th to December 10th)

Grouse shooting has a big impact on the ecology of natural moorland. Huge swathes of our moors are burnt each year in order to stimulate new heather growth. Fresh heather shoots form the staple diet for young grouse. The burning of heather adds tremendously to Britain's carbon footprint and negatively affects the ability of spongy moors to retain water. 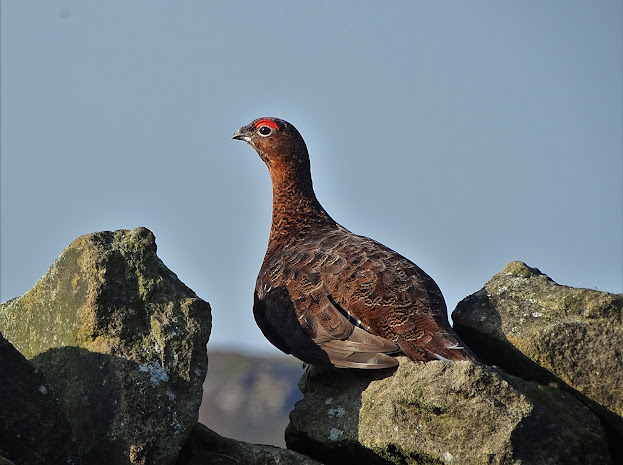 The rich and rather secretive grouse shooting fraternity employ countless gamekeepers who are known to  persecute other moorland creatures such as mountain hares and raptors like buzzards, red kites and peregrine falcons. The grouse shooters call this "environmental control" or "moorland management". Ha!

Yesterday, as I walked from Glossop up onto the wild moors to the south of the town, I spotted not one but a pair of grouse sitting on a drystone wall. I pulled out my camera and tried to photograph them but the sun was shining brightly behind them. The resulting images were little more than backlit silhouettes. Disappointing.

However, twenty yards further up the track I looked to my right and saw another red grouse sitting on a drystone wall. This time the sun was in my favour and I was no more than five metres away. Furtively,  I pulled out my camera again and managed to take ten pictures of the bird before he or she flew away. I have chosen three of those pictures to illustrate this blogpost.

It was a magical minute.  In my considered opinion, the only shooting of red grouse that should be allowed is indeed with a camera. No guns. Grouse shooting belongs in history books - not in modern times. Grouse should be appreciated as the beautiful creatures they are - not as private targets for privileged dimwits.

SAVE THE GROUSE! LET THE MOORS BE WILD AGAIN! 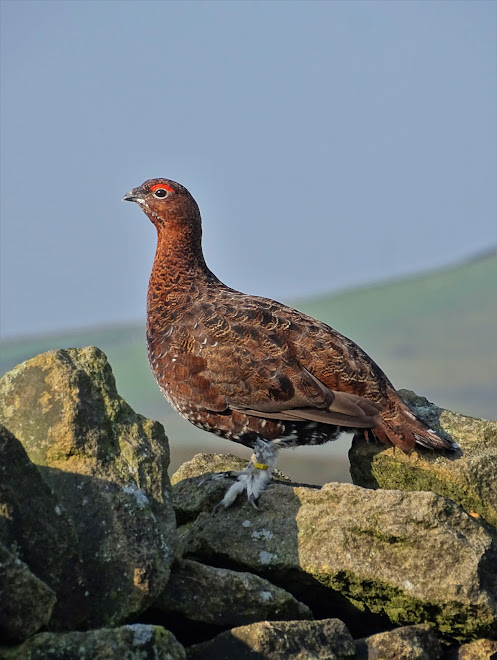