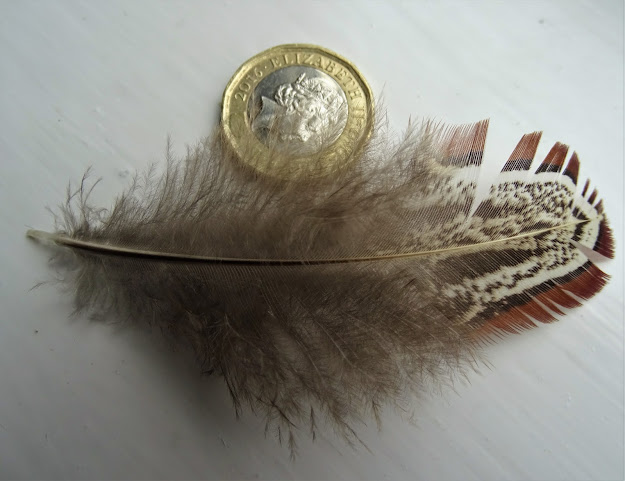 Plumology is the study of feathers. There are people out there in the world who have devoted their working lives to feathers. Unsurprisingly, they are known as plumologists. There's a lot to know and a lot to be said about feathers. The story will never be finished.

Not far from the old guidepost at Moscar Cross, I spotted a feather. It's the one at the top of this post. As I am not a plumologist, it was the delicate attractiveness of the feather that caught my eye. The "rachis" is the central trunk of the feather growing up from the "calamus" or root that would have been attached to the host bird's body.

At the base of the feather there are downy, disconnected feathers known as "afterfeathers". They don't have barbs and their main function is insulation. The main shape of the feather is called the "vane" and this is made up of barb-connected  "pennaceous" feathers. Slightly oily for water protection, these outer feathers also have aerodynamic significance.

I thought that the feather I found might have belonged to a red grouse but my googling efforts perhaps proved otherwise. Now I suspect it came from a bird of prey - maybe some sort of falcon. That's we human beings all over isn't it? Trying to name, to classify, to pin down - leaving no stone unturned. From stars, to butterflies to sea creatures at the bottom of the Mariana Trench - we want to name and know everything - as if mystery was somehow an anathema.

Surely, there's nothing wrong with simply looking at a feather, noticing its virtual weightlessness, observing the particular markings that have emerged from many thousands of years of avian evolution. They were here before us - the birds I mean - the direct descendants of flying dinosaurs when we were not even imagined. 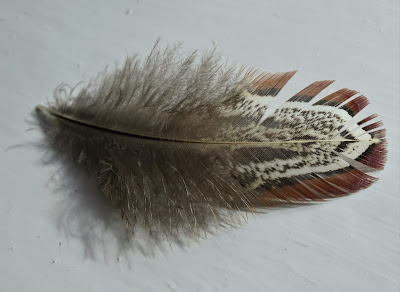