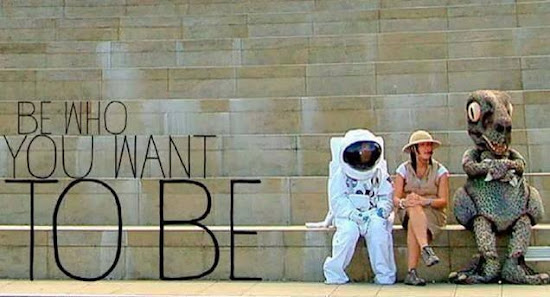 "Believe in yourself and follow your dreams!"..."You can be anything you want to be!"... These are expressions that always rankle with me. They are usually doled out by apparently "successful" people who by talent or good fortune happen to be walking in the limelight and seem to imagine that we can all go there if only we believe in ourselves. It is, in my view, utter nonsense.

"You can be what you want to be..." Okay then, what about someone with Down's Syndrome. Could he or she get to be  an astrophysicist? Could a person without legs get to be an Olympic long jumper?  And if everybody desperately wanted to be the prime minister of this fair kingdom how would that happen when at any time there can only be one vacancy?

If everybody got to be what they wanted to be, the world would be filled with pop singers, professional footballers, novelists, ballet dancers and film stars. We would all be living in mansions with swimming pools and remote control gateways through which we would swish by in Italian sportscars.

Who would sweep the streets? Who would pick the vegetables? Who would dig the drainage trenches? Who would clean aircraft cabins in the middle of the night? Who would nurse poorly patients in hospitals? Who would drive the buses and the trains and who would cut the grass? Who would service conveyor belts in factories or fix broken streetlights or bake bread or paint railings? Utter nonsense.

As I have been writing this, two women have appeared across the street in an old silver car. They have climbed out and got their stuff from the back - buckets and mops etcetera. They have come to clean Number 175 as they do every week. Do you think that this is what they wanted to be - domestic cleaners? But it's a job that needs doing. Somebody's got to do it and they are nobly earning cash to support their families instead of following their dreams. It's the same with the pair of helpers who every day visit housebound Eileen at Number 184. Being what they want to be? No way - but still fulfilling an important role in our society.

If you truly believe that we can all be what we want to be, please keep that trite opinion to yourself while the rest of us just get on with living, accepting the cards that have been dealt to us, trying to be happy.