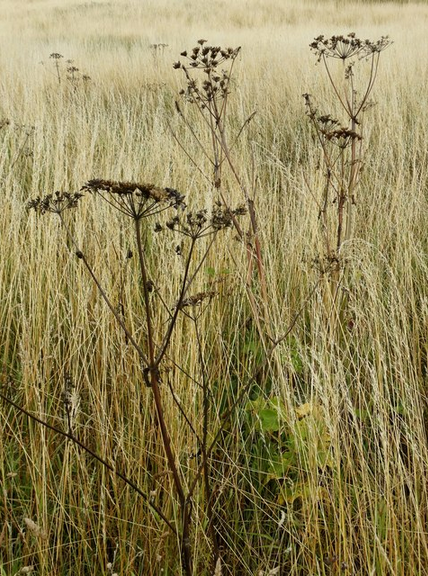 Boastfulness is one of humankind's less attractive traits so please forgive me for the words that follow.

6159 photographs were submitted to the geograph website between August 15th and the 21st. Having been the winner in Week 31 with my picture of good old Fred Fox, I was happy to rest on my photographic laurels for a while. But blow me down with a feather, I am also the Week 33 winner! The winning picture is presented above for your discernment. I titled it "Mid summer vegetation by Thievesdale Wood".

It was composed when I went walking around Carlton-in-Lindrick and Blyth. By East Thievesdale Wood, I noticed a sun-bleached meadow with the bones of hemlock plants rising from the parched grassland. It seemed so fragile, like a Japanese painting. Crouching down, I aimed to exclude the horizon so that all attention was fixed on that tinder dry growth.

To tell you the truth, I didn't hold out much hope for that particular picture when I saw it in the week's competition shortlist. Most winners are of Scottish landscapes or Welsh mountains - spectacular scenery. In comparison my picture of a dry August meadow seemed distinctly unremarkable. Perhaps that is what the judge liked - drawing visual attention to the  understated ordinariness of a thirsty summer meadow - the sort of scene that most people would walk past without a second glance.

I had two picture of the week winners last year and two in 2013, now two in 2015. Given the number of geograph contributors this record is amazing. My head is growing so big it's half as big as Donald Trump's - like a big fat hot air balloon. Bloggers will need to queue up in an orderly line if they hope to get my autograph.
- September 03, 2015