Sometimes, when I am out and about, rambling along less trodden paths in less salubrious places, I feel a bit like an explorer of yore -  a latter day David Livingstone. But I am not bringing religion to the natives - nor coloured beads or mirrors, I am just looking to record what I see with my trusty digital camera - far quicker than a sketchbook.

Last Friday, I was back  in an area where tourists or "Berghaus" ramblers with flasks and compasses never tread - North East Derbyshire. For a hundred years this was a grim area of mining villages and smoky coking plants, railways and humble terraced homes even though all of that was layered upon a much older rural history. Now you could say that it is almost post-industrial. The mines have gone and the coking plants are wastelands.

I parked in North Wingfield opposite the  "I (Heart Shape) Hair" Salon, then set off on The Five Pits Trail to Wolfie Pond before looping back to the Chesterfield road where I confess that I purchased a small bag of chips from The North Wingfield Fisheries. Delicious and golden they were too  and so  I consumed them with greedy relish before advancing to Station Road.

Jungle drums were beating deep in the forest and the mosquitoes were like miniature Spitfires attacking exposed parts of my bodily temple as prehistoric crocodiles slid into the steamy River Rother. But I carried on determined to claim this ungodly land for Queen and Empire.

Soon I was in the dark heart of Danesmoor where I saw a visual poem of our times. On one side of the street, the old Bethel Chapel was being converted into a residential property and on the other side the presumably once popular "Parkhouse" pub was little more than a burnt out shell. Possibly an insurance job. That is how it is these days. Old ways are being buried under mountains of passing weeks and years. Perhaps it was always thus.

Then on to Hallgate Lane and Lower Pilsley. To Seanor Farm where I surprised a nervous heron in the farm pond and then over the fields and back to the car in North Wingfield. Fortunately, the native North Derbyshire-ites hadn't torched it and I was able to drive back to civilisation, like James Cook aboard "The Endeavour" after his first visit to New Zealand.

More proof that I was there:- 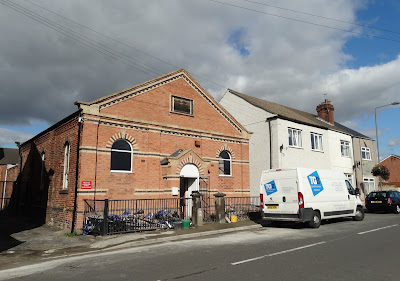 Ode to Danesmoor. The visual poem of our times in Danesmoor - chapel being
converted into a dwelling and the burnt out "Parkhouse" pub. 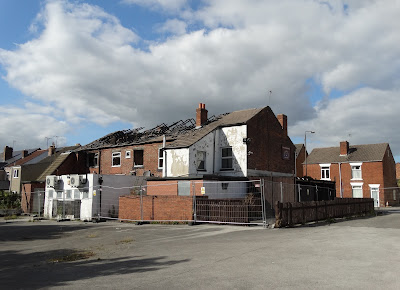