Some words are pleasing to utter. They can have a mysterious or magical quality. Not so long ago I reflected on the word "hinterland" but now I am down by the sea. Yesterday, while listening to the radio, I was reminded of a lovely marine word - "spindrift". "Spindrift" is the foam that is whipped off the crests of waves during a gale. Though the word seems rather calm and homely, "spindrift" only occurs when the weather is wild and angry.

While mooching along the beach you may come across "flotsam and jetsam" - two more pleasant-sounding marine words. "Flotsam" is floating things lost from a boat but "jetsam" is stuff that was deliberately cast overboard or jettisoned into the sea. Every piece of flotsam and jetsam has a tale to tell even though it is further evidence of man's careless relationship with The Earth and its seas. Of course before ocean trade began there was no flotsam or jetsam. The terms are fairly modern - probably dating back to the seventeenth century.

Where the sea meets the land there is very often a strip of seashore that seems to belong neither to land or sea. Here there are strange seaside plants and perhaps nesting birds, pieces of driftwood and shells. Sometimes, in stormy weather, the sea may attempt to claim it just as land plants try to encroach upon  it in the growing season. This area is known as "the littoral". I love that word - "littoral" - never fixed, always subject to change - between the land and the sea. Haven't we all walked along "the littoral", humming songs or thinking secret thoughts poking around amidst the pebbles, the driftwood and those spiky maritime plants?

And thinking of maritime plants with their various names - sweet vernal grass, sea cabbage, blackthorn and lizard orchids for example - you might come across "samphire" - another pleasant word to say. "Samphire" is an edible seaside plant that belongs to the parsley family and is sometimes referred to as "sea asparagus". Curiously, around the Dee estuary in Cheshire and North Wales it is often called "sampkin" but I like the word "samphire".

It is the kind of word that belongs in a poem, along with "spindrift". "flotsam and jetsam" and "littoral" - perhaps a poem that focuses mostly upon word sounds rather than intellectual probing or philosophical suggestion that aims to "plumb the depths". Sometimes, you only want the sound of words, like healing music in your head. 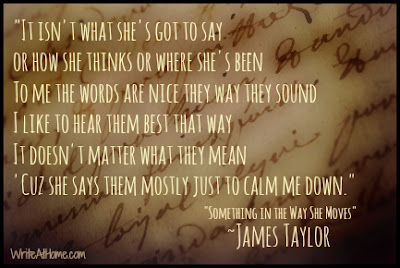