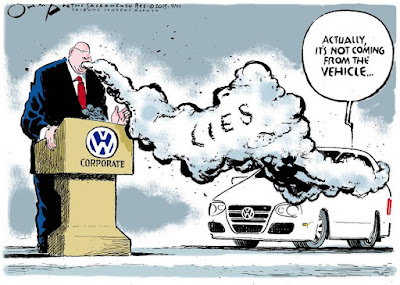 WINTERKORN I must insist that the following agenda item remains top secret. If the matters that are to be revealed should leak into the public domain, it would surely cause tremendous damage to the reputation of our company. Now over to Helmut whose software team, I am sure you will agree has come up with an ingenious solution to the American emissions issue!
(Guffawing laughter from the rest of the board)
SCHWEIN Damned Americans!
HELMUT  Gentlemen. If you study the papers I have placed in front of you you will see that we have found a way of doctoring the onboard software so that emissions outputs during official testing will appear to be four times lower than in normal driving conditions.
SCHWEIN You beautiful man Helmut! You mean it's roughly the same process that we have been employing in Europe since emissions testing began?
HELMUT Precisely but with a little tweaking.
WINTERKORN With the cleverly depressed emissions results our green credentials will not be impaired and we can bolster sales across North America just as we did in The European Union and Asia.
ENGEL But what about the hidden impact on the environment and on people's health in urban areas!
SCHWEIN Don't be such a softie Engel! This is business my friend. Besides the relationship between diesel emissions and respiratory difficulties is not entirely proven.
WINTERKORN I agree with Herr Schwein. It is essential that we develop strategies that defeat the march of dimwitted environmentalists and the governments that have been drawn in by their absurd propaganda!
SCHWEIN I propose that we move forward immediately with Helmut's ideas if we are going to advance sales to the next level.
WINTERKORN All in favour say "ja".
REST OF BOARD  Ja!
WINTERKORN Now before I draw this meeting to a close gentlemen and err... Frau Sexkätzchen , can we rise to sing the company song