It is a long time since I experienced the feeling of drunkenness. Years in fact. Nowadays, though I continue to enjoy three or four  beers every other evening, I never get myself into a  state of inebriation. I like to be in control and to wake refreshed, ready for a new day. The thought of a hangover attracts me about as much as signing up to be a warrior for The Islamic State.

But there have been times... when I was younger. In university and elsewhere. Times when I drank myself stupid so that I did shameful things that were totally uncharacteristic of the real me - like releasing a dark beast that usually sleeps within. Punches I threw. The arguments I had. Vehicles I drove. Women I pulled. Staggering homewards. Waking with no memory of what happened the night before. There are things I did when really drunk that I have never shared with anyone - secrets that I will surely take to my grave.

My parents were never big drinkers. Their relationship with the demon alcohol was sensible and most unremarkable. However when Mum was in her late seventies, she began to like a tipple and her drink of choice was strong whisky. She began to drink it in the afternoon and the measures she poured herself became bigger and bigger. If she came to stay at our house she would sometimes sneak into our dining room to pour herself secret glassfuls.  Even when she was in the old folks' home where she finally died she would badger care assistants to fetch her drink. It was a sad thing to witness.

Drunkenness can be fun for an hour or two - especially if it happens in pleasant circumstances with friends or family - but more often than not it is the precursor of bad things. Buying alcohol is quite costly and the money that is spent on it can be a big drain on personal finances. It can threaten physical and mental health in several ways including diabetes, heart problems, personality disorder. It may cause serious road traffic accidents and it is often a key factor in sexual or physical assaults. Theft, vandalism, days off work, family battles and social media rants are frequently spawned by drunkenness.

The English pub is a special institution. My distant cousin John in Silsden referred to it as "the third place" - not home or work but the "third place" in which we have our being - possibly surrounded by other pub goers and friends. It is somewhere you can relax and let off a little steam, play a game of darts, read a newspaper or just stare into the foam on top of your pint. But of course pubs can also be the very places where drunkenness happens. It is undoubtedly a question of balance and of self-restraint. The line between responsible drinking and alcohol-fuelled mindlessness is paper thin.

How is your relationship with alcohol these days? 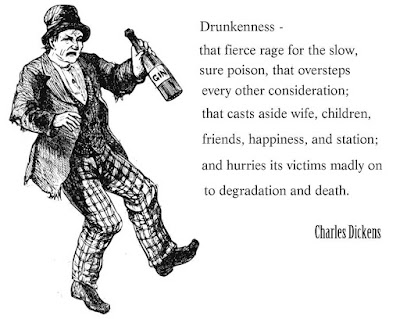