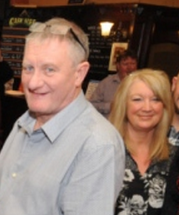 Let me introduce you to the couple shown above and then you can join me in wishing them farewell. They have been the licensees at my local pub - "The Banner Cross Hotel" for the last eighteen years. On the left there's Roger and behind him his partner in love  and war and business - the redoubtable Janet.

They are upping sticks and moving to Tenerife where they plan to forge a new life together in the sun. Both ardent Sheffield Wednesday fans I suspect that there is much that they will miss about their home city but they are ready and very willing to go. It will be an adventure and if perchance it didn't work out they could always come home.

Both strong characters they have presided over the pub like the king and a queen of a small country. When you entered their pub you were very much in  their realm. Janet would often yell out, "WE'RE ALL WEDNESDAY AREN'T WE?" and frequently gave Sheffield United fans short shrift though it was mostly  a kind of pantomime. Roger was often bad cop - making sure there was always a good level of behaviour in the pub and barring people who stupidly crossed the line. But underneath it all they were decent, hardworking licensees who did their best in difficult times for pubs.

Many's the pint of foaming ale they have served me and many's the night I have spent in their company or tackled their many pub quizzes - sometimes successfully despite quizzing masterminds like Higgy, Jonathan, Richard and the i-phone cheats."Are you all stupid or what?" Janet would sometimes bellow into the microphone.

Both Janet and Roger have been known to sample  their liquid wares. I guess it is one of the by-products of running a pub and it's hard to maintain a healthy relationship with alcohol when you are surrounded by drink and you live right above the pub.

There was a big leaving party in the pub on Saturday. I went down but it was just too busy for my liking so I turned round and went down to "The Lescar" instead. Apparently the bar was three or four deep with thirsty customers keen to pay homage to the abdicating monarchs. I saw them for the last time yesterday evening when the pub was quiet again - except for old favourite songs on the juke box and Janet dancing along with close friends. It has been such a long and much anticipated goodbye.

A new chapter is about to begin at our local and nobody knows for sure what the future holds for it. There could so easily come a time when we will look back with nostalgic longing on the eighteen year era of King Roger and Queen Janet.  As they board the plane for Tenerife and their new life, I wish them God speed as people sometimes say but in answer to Janet's famous capitalised question I say finally, "NO! WE'RE HULL CITY!"
- September 22, 2015