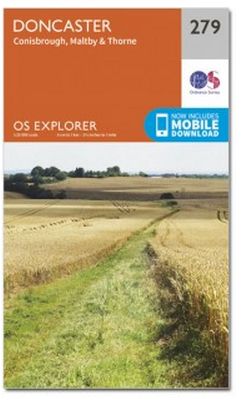 Great Britain is very well mapped by our brilliant Ordnance Survey organisation that began its amazing work back in the middle of the eighteenth century.

They produce a wide range of meticulously detailed maps that can be ordered online or bought from all good bookshops. Without Ordnance Survey maps, I would never have been able to explore this green and pleasant land in the way I have done. Their maps have led me to all manner of secret and wonderful places as I have plodded through the landscape.

Unbeknownst to me, OS have been staging a series of photo competitions this year - the prize being to get your picture printed on the front cover of one of their maps.

It seems that they had no suitable entries for OS Explorer maps 279 and 280 which cover lands to the east of Sheffield. So - they trawled through the geograph website and found two of my pictures and wonder of wonders they are now being used on the map covers for Doncaster and The Isle of Axholme!

I don't think they are the best examples of my photography by a long shot but they do the job required and I am rather proud of this very unexpected achievement. It gives me a little taste of immortality even though the many people who purchase and use these particular maps will have no idea who the photographer was. OS are sending me complimentary copies of the maps.

And now that I know about this competition I have sent off a dozen entries for their Landranger series of maps so maybe I will have another success or two. Of course there's no prize money involved but still I am well chuffed!

The Isle of Axholme is a low-lying rural area west of the River Trent. It is where Shirley's parents Charlie and Winnie had their arable farm and it really does have something of an island mentality - rather cut off from the outside world as it was before Dutch engineers finally drained the area in the seventeenth century. For this reason, it is especially pleasing that my photo of the riverside has made it on to the front cover of Map 280.
- September 21, 2015