Shirley was away in Harrogate for the day - joining hundreds of other women at a British Women's Institute rally to celebrate the organisation's first centenary. Our son Ian had come up from London to attend the wedding of two former school friends. So what could I do?

I decided to jump in the car and head off for the Chatsworth estate with my camera and boots in order to bag a particular geograph square that I had so far missed. I reckoned I could walk round the back of the grand house and maybe get into the gardens from the wooded slope behind it. Little did I know that this is the weekend of The Chatsworth Country Fair.

I parked just beyond a little stone bridge in the village of Baslow which lies a mile north of Chatsworth House. It was only when I reached an old Victorian turnstile that it suddenly clicked that the fair was on. Some ticket sellers in official day-glo jerkins were stopping people and selling tickets.  £23 per adult! Brazenly I just walked past them and nobody called me back.

The sound of gun fire could be heard - echoing around the valley and ahead there were thousands of parked cars. Closer to the house, there was a large village of marquees, trucks and flags - with a helter skelter and big wheel towering above them. Thousands of people were milling around and voices came over the tannoy system about sheepdog competitions and horsey events in the main arena.

This wasn't what I had come to Chatsworth for.

Behind the house - to the east there is a well-constructed seven foot stone wall with no openings in it. It runs for about a mile. At one point I was surprised to find a tall early nineteenth century chimney that was apparently built in connection with The Grand Conservatory a couple of hundred yards away inside the wall. It was built under the instructions of Joseph Paxton, the brains behind the construction of The Crystal Palace in London.

I didn't want to kill myself climbing over the boundary wall but at last I found a point where there was an intersecting wall and an opportunity to get across safely. Soon I was in the gardens and descending the arboretum to the grotto with its neighbouring pond.
Then I headed for the long oblong canal pond that runs south of the grand house. Temporarily sited at the southern end of the pond is  a bronze sculpture by Yorkshirewoman Barbara Hepworth called "Three Obliques (Walk In)".

With more photos in the camera, I followed a sign saying "House and Garden Only Visitors Way Out". Soon I found myself near more official country fair ticket sellers in bright orange jerkins. They were dealing with others so once more I walked straight past them as if I was The Duke of Devonshire himself!

The country fair is an odd affair of countrified people in Barbour jackets, tweeds and knee boots. They all seemed to have thoroughbred well-groomed dogs on leads. Many of the tents have a promotional purpose and there are concessions where you can buy "real beef" burgers for £6 or glasses of wine for £5. In the main arena there were packs of bloodhounds and beagles and posh people  in traditional hunting gear.

Something you don't see very often in England was a stall for the sale of rifles and other hunting weapons. The guns were all under lock and key and their sales were being strictly monitored. And there was a stand for the Country Alliance pressure group. Also you could try archery over at the estate's cricket ground.

It all felt quite alien to me but I was happy to have bagged the geograph square and some more pictures too. 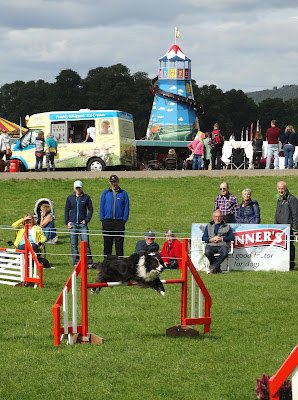 My two country fair pictures do not give an accurate impression of how busy it was. 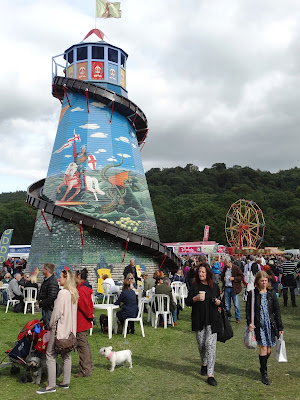