Yesterday I drove over to Hull to watch my beloved Tigers draw 1-1 with Blackburn Rovers. Before the match I was to have lunch with my old friend Tony in Beverley but I set off early in order to feed my photo-taking  addiction with a detour to the villages of Cherry Burton, Bishop Burton and Beverley Westwood which is an area of ancient common land to the west of the town. Here are three photos from that detour:-
Then on to Tony's  house for delicious sausage sandwiches and talk about his recent rather difficult and costly divorce. We set off for Hull at one thirty and parked in the  rooftop car park at St Stephen's shopping centre before strolling to our temple, our mosque, our Lourdes - the home of The Tigers - The KC Stadium. In the end it was a frustrating match for us. Our lads were not firing on all cylinders and there was a shared feeling round the ground that we had let Blackburn off the hook.

On the way home I took another detour to St Andrew's Quay by the mighty River Humber. I was hoping to get pictures of the evening sky framed above The Humber Bridge which was once the longest suspension bridge in the world. In a way the angle was wrong for the sun was sinking far to the right of the bridge. Even so, here are two pictures:- 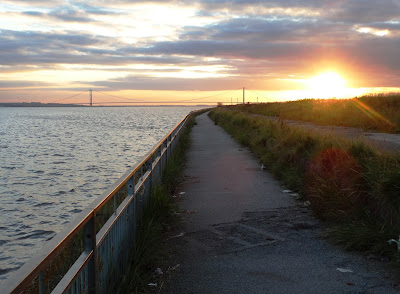 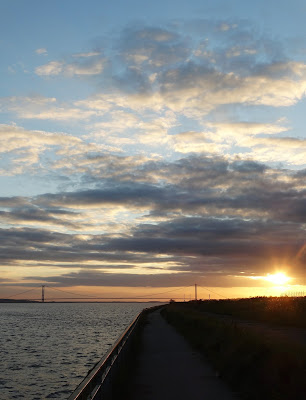 Someone was sailing on the river in the evening light. I turned to compose the following picture before heading home to watch England lose narrowly to Wales in the Rugby World Cup on TV of course:- 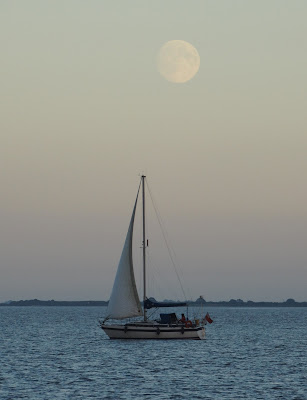 P.S. Our lovely daughter Frances reached her twenty seventh birthday yesterday. Next weekend she is moving cities - from Birmingham to London and Shirley and I will be hiring a van to help the transition.
- September 27, 2015