Do you remember "Deano" - our friendly garden gnome in his smart Hull City kit? Well today he seemed to have the weight of the world upon his little gnomish head and was threatening to turn into a snowman after five inches of snow had fallen upon Pudding Towers within three hours. Here he is:- 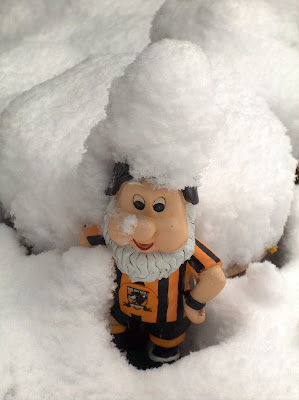 Global warming? The entire Pudding estate is clogged with snow so tonight's masked ball has had to be postponed and tomorrow's pheasant shoot is also off. Birds that inhabit the estate are having much trouble finding titbits of food. However, earlier today I watched in horror as a sparrowhawk plunged from a high branch to take a young blackbird for his lunch. It was so quick. All that was left was a mess of black feathers fluttering in the snow. I felt bad because the unfortunate creature had been nibbling at the old Christmas pudding I had scattered in the centre of the lawn. It was as if I had unwittingly laid a trap.

Actually I am also feeling trapped. No vehicles are moving up or down our street. The buses are off. Manchester Airport was closed just twenty four hours after Frances had flown back to The States.

As the kitchen staff were unable to get in, I was forced to make some turkey soup myself - pearl barley, swede, courgette and dumplings added. It was ready and piping hot when Shirley walked in at two o'clock after completing a half day at the medical centre. In the midst of all this snow, we decided to book a February weekend break at Ely in Cambridgeshire - somewhere we have never been and something to look forward to. More pictures of the snowbound estate:- 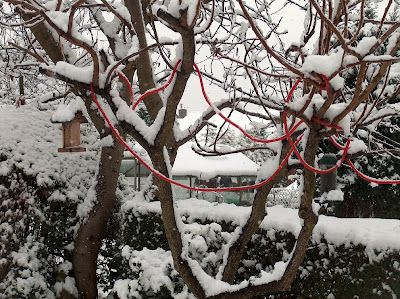 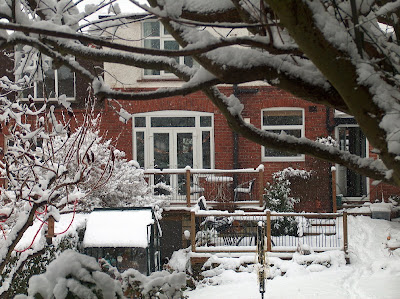 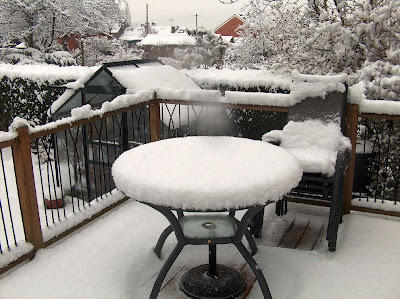 No barbecues in the near future