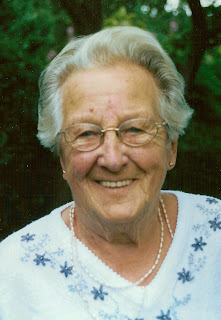 Mum at 81 - a recently scanned photo.
It's two years, four months and three days since my mother died. I have thought about her every day since then. In some ways it is as if she hasn't gone at all. She was, as small children might claim, the bestest mum ever and very broad-minded but I will tell you a tale concerning her that I have never shared with anyone before.
As you might imagine, I was a precocious child. I grew up in a largely male household - Dad and three brothers. In some respects, the world of femininity - women and girls - was a total mystery to me. But from a very early age, I was starting to ask questions about the position in which I found myself. Who was this God fellow? What was this "Bible"? What was that war all about? Where is Korea? Where do prime ministers do? Why did they drop a bomb on Hiroshima? And rising above such questions grew a curiosity about girls, women and the processes of reproduction.
Some time probably late in 1960 or 61, on our brand new television set we were watching a black and white drama in which one of the female characters was talking about "deciding" to have a baby. I piped up - "How can she decide? Babies are just born aren't they?" I noted the knowing glances between my parents and words unspoken.
Curiosity was aroused and weeks later, I found myself in our bathroom where my mother always got dressed after her early bath. In the absence of deodorants, she liked sweet smelling talcum powder and like many middle aged women of the time, squeezed herself into a rubberised Platex corset or girdle each morning. It had clips on it where she could attach her stockings - rather like the clips on suspenders. Tights hadn't yet appeared in rural East Yorkshire.
"So what you said mum is that girls don't have willies. So what do they have instead?"
"They have a hole that babies come out of.."
"A hole? Are you sure?"
"Yes I'm sure."
"Well can I see yours then?"
"No you can't."
"Why not?"
"Because you just can't. It would be...embarrassing>"
"Why? I just want a look."
I was eight years old and mum was reddening like a beetroot. But like a scientist, I just wanted to understand - to see this hole she was talking about - this hole that later I learnt was called a "vagina". I repeated that secret new word over and over with my eight year old mates who shared my inquisitiveness.
Perhaps a year later, my family and I were on holiday in Germany - in a public park in Munich where a flowing stream had been cleverly harnessed by the city authorities to provide a safe but exciting water experience - finishing in safety rigging.
A few yards away from our grassy base on the lawns that edged the stream, I saw a German girl of perhaps six or seven. She was laughing and jumping about with glee before venturing into the stream and she was stark naked. I could hardly take my eyes off her. No visible genitalia, just a kind of crease. And I remember absolutely nothing else of that Bavarian camping holiday - just that naked girl splashing in the flowing stream.
So what mum had said was true. It's funny how certain memories stick and others just evaporate. And I think of that innocent request I made in our bathroom that morning. Of course she couldn't show me. The weight of morality and civilisation was just beyond the bathroom door. What would I have done if one of my children had innocently made a similar request? Like mum, I'd have blushed and turned away.
- January 17, 2010