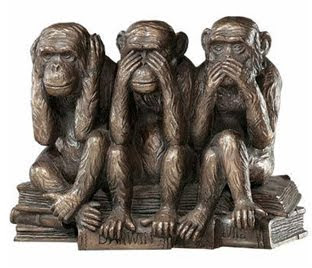 Years ago - when I was at university - perhaps unsurprisingly, I mostly concentrated on the two subjects which would form my joint honours degree - English Literature and Education. However, I also took some subsidiary courses in my first two years - Swedish, Religious Studies and Sociology. It was in the last subject that I was guided to learned articles and research evidence surrounding non-verbal communication.

Of course, all of us read non-verbal signals. It's part of everyday communication. At the most basic level - at least in the western world - a nod of the head signals "yes" and a shake signals "no", a smile suggests pleasure or contentment whilst a frown suggests displeasure or anxiety. Moving onwards and upwards from that base level, it is possible to read a whole range of much less obvious non-verbal signals. It is a fascinating area of study both for lay people in everyday life and for social psychologists seeking better academic understanding.
On Saturday night, Shirley and I broke out of the igloo, tied tennis racquets to our frostbitten feet and trudged down to the local pub. It was warmer in there than at home. Across the room we noticed a group of respectable thirty somethings, conversing while they drank their favourite tipples. A man, sitting perhaps nine inches from a blonde woman had his hand behind her seat and was persistently fingering and feeling her hair. His other hand sat upon his crotch and only moved from there to lift his glass. The woman's head tended to incline away from her boyfriend. The two of them made virtually no eye contact in the five minutes that we observed them. Meanwhile another man had his elbows on the pub table but his right hand, always hidden from his companions under his left elbow, fidgeted incessantly.
What was going on? It was unexceptional and undramatic behaviour but was the hair fiddling some kind of subconscious sexual foreplay? Was it threatening - as if to say - I really want to take this mane of hair and drag you back to my cave. Was it harking back to the man's realtionship with his mother or was it simply a statement such as - I want to care for you and look after you. The simultaneous crotch touching probably suggested a sexual undertone and the coquettish turning away of the woman's head may have suggested that though he was the pursuer, she was the final arbiter.
The man with the hidden but ever-moving fingers was clearly displaying a posture that he hoped would spell out comfort, ease and relaxation but the fingers were surely telling another story of frustration and feeling ill at ease.
We all have our own non-verbal foibles. When deep in conversation, my eyes will sometimes glance away from the person I am speaking to to focus on thin air or whatever uninteresting inanimate object is nearby. This seems to help me to concentrate on the words I am forming, giving respite from the eyes and face of my conversational partner. So often when I do this, the other person will look away in the direction of my gaze and many times I have had to explain that I am simply concentrating on what I am about to say. It is a type of non-verbal behaviour that could so easily be mis-read.
Although I was never a fan of "Big Brother", occasionally there'd be an expert commenting on the housemates' body language and so often that commentary made perfect sense. In a recent episode of "Airline" an Easyjet manager at Luton found himself being confronted by an angry passenger. The passenger was wide-eyed and demanding, even though he had missed his plane through his own stupidity. He moved into the duty manager's personal space so that their noses were less than six inches apart. It was at this point the unfortunate manager said politely "Please get out of my face!" before walking away - having I think correctly read the signs that physical aggression would be the next step.
That spell at university taught me that non-verbal communication, body language and gesture provide a wide range of information that can be read either with ease as in the case of the headshake or with much difficulty when the signs are more subtle and driven by subconscious memory, prioritisation and urging. At one level you might say that all of us spend our entire lives trying to read the signs that may or may not accompany spoken words. 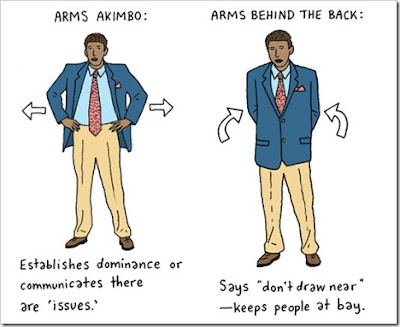