Yesterday, a murky rain-soaked Friday, we went to a funeral. It was for Shirley's Uncle Arthur who had just passed his eighty third birthday. This man lived and worked all his life in the north Nottinghamshire village of Misterton, apart from a brief period between 1949/51 when he completed his National Service - travelling to such faraway places as Jordan, Egypt and Palestine. He was a machine fitter and gave forty eight years of his working life to the same small engineering company during which time he and his late wife Madge raised a family of five daughters.

There were three phases to the funeral. Firstly, the cremation at the Woodlands Crematorium in Scunthorpe, then a memorial service at Misterton's imposing Methodist church and finally a social gathering or wake in the social club attached to Arthur's old engineering works. A poignant discovery was that Arthur's wake would be the very last event to be held in the social club which is due for demolition next week. He had been there at its inception and for many years was the club's secretary and chief steward. 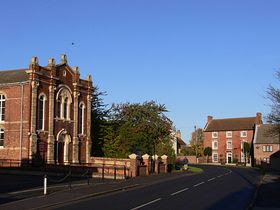 At the crematorium we sang the rousing "Abide With Me" by Henry Francis Lyte (1793 - 1947), a hymn which is always sung on FA Cup Final day followed by "Guide Me O Thou Great Jehovah" by William Williams (1717-91) with the familiar first verse ending:-

Feed me now and evermore

Feed me now and evermore

Two emotional and memorable hymns that everybody felt comfortable singing. Then on through the January gloom to Misterton.
In the chapel, the grim reverend preacher was dressed like a vicar from Dickens. His loud and superior enunciation cut you like a knife as he gazed superciliously over his horn-rims. The prayers and the blessing were delivered without any illumination from the light of the Lord but like bitter instructions to a firing squad. During one of the hymns, he seemed utterly detached even bored, polishing his spectacles then adjusting his microphone while peering from his wooden Victorian pulpit under the organist's even loftier perch. However, the hymns were once again worth singing - old and familiar.
Praise my soul the King of heaven!
To his feet his tribute bring.
Ransomed, healed, restored, forgiven
Who like me his praise should sing?
Praise him! Praise him!
Praise him! Praise him!
Praise the everlasting King! (again by Henry Lyte)

The hymns were well-chosen for singing goodbye to Arthur. A couple of them I hadn't sung since, at the age of fourteen, I resigned as a choirboy from our local church. Strange how the tunes came back to me straightaway - as if they were imprinted in my genetic program. Those hymns emerged from a God-fearing world in which churches were filled on Sundays and few doubted the creed that said there was a better world beyond this if you could just learn to be good and live a pious life. But Arthur will know no other life. His heaven was here on earth with his wife, daughters, grandchildren, friends and workmates. Why would you want it any other way?
- January 23, 2010