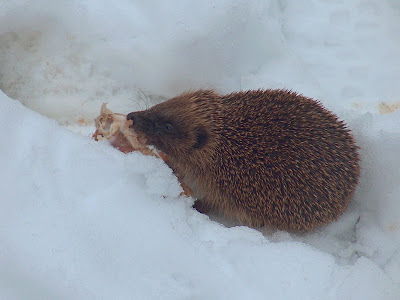 Fancy a wing Hedley?
Once upon a time, there was a young hedgehog called Hedley. He was an independent fellow who knew how to look after himself. As winter arrived, he found himself a snug place to enjoy a much-deserved semi-hibernation close to the vent of a central heating boiler under somebody's wooden decking. His instincts told him he'd be safe there and would only need to stir from his slumbers once in a while for food - preferably delicious pink and juicy earthworms tunnelling temptingly through the chocolaty soil.
On January 12th, Hedley's empty stomach drew him out of his state of suspended animation. He sniffed the air. It smelled different somehow, as if the usual odours of nature were suppressed by something. Although Hedley's hearing and sight were unexceptional, his sense of smell was acute and he could pretty much tell what was going on for many yards around simply by drawing air in sharply through his nostrils. His parents - Daphne and Robert had taught him well, before they met their inevitable pancake-like end on the nearby main road - a stretch of tarmac that Hedley had vowed never to cross. After that, he had been raised by his Nana Sofia in the village of Grenoside. She hugged Hedley so hard that her prickles hurt him.
He squeezed out from under the decking to see an ocean of whiteness - the like of which he had never seen before though his Uncle Ian, who later emigrated to Florida, had once told him a terrifying story about a snow queen who inhabited an ice castle in a white world covered with, what was it Uncle Ian said, snow - yes that was it - snow.
Hedley snuffled beneath some fallen bracken only to find that the soil was frozen solid. It was like iron. "Oh dear," he moaned to himself. "I will never find any worms in this soil. I shall starve to death!"
Two tiny hedgehog tears trickled from his shiny little black eyes but then very faintly he smelt something a couple of yards away. What was it? It seemed to be coming from beneath the white stuff. It wasn't worms or grubs or those bulbous caterpillars he loved to gorge on in the summer but it was certainly meaty. He just had to investigate.
Poking around under the snow with his pointy nose and his little front feet with their tiny digging claws, he discovered a turkey's wing bone. There were some strands of icy meat clinging to it though it already seemed to have been gnawed by another creature - perhaps Basil the Fox who sometimes called in this garden when doing his nightly rounds. "Oh dear!" said Hedley, "I'm so hungry!" so he began to peck away at the bone, knowing that he needed nourishment to help him sleep through January's remaining bittercold nights.
Hedley didn't notice when a big human creature tiptoed slowly over the snow-covered decking to snap photographs of him and he also didn't notice when the same big man snuck up behind him with a tin of Somerfield chicken and tuna cat food which he placed quietly next to a terracotta plant pot. Moments later, Hedley smelt something mouthwateringly scrumptious in the air and was magnetised towards the cat food like a stage hypnotist's victim. "Mmmm!" Hedley growled contentedly. He would sleep so well after this. 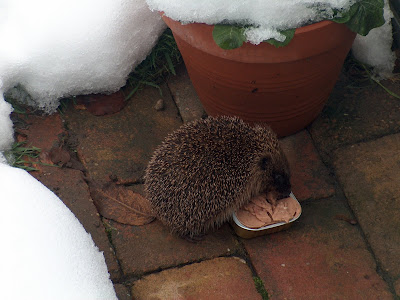