There has just got to be more to life than ice and snow. Any moment soon, I am expecting a big woolly mammoth to come lurching down our road, tossing Corsas and Fiestas onto the snowy verge with his monstrous tusks. Anyway, today I decided to break out of our igloo and journey into Sheffield's city centre - always known as "town" by the local eskimos. I was going to The Showroom which is our city's only independent cinema.

I sat in the dark and soon the film came on - "Nowhere Boy" directed by Sam Taylor-Wood and only released at the tail end of last year. It's about John Lennon's life between 1955 and 1961 and is eminently watchable.
Only Japanese pilots still hiding in the jungles of Malaya and Borneo will not know at least some fragments of John Lennon's story - how he grew up with his Aunt Mimi in a fairly affluent part of Liverpool not far from Strawberry Field, how his unreliable mother Julia died young, how he met Paul McCartney, how he formed a band called The Quarrymen and how he became captivated by the newly emerging rock and roll music of middle America. 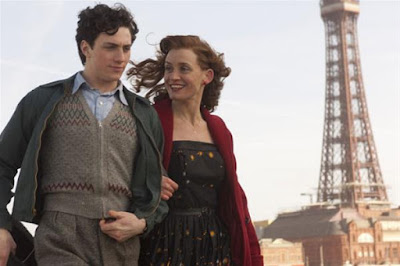 Above - scene from the film - Lennon and Julia at Blackpool. Below - A young John Lennon with the real Julia - his mother. 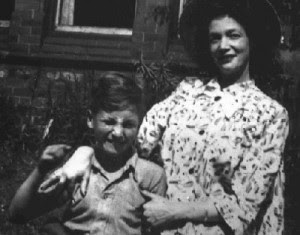 The film brings it all alive rather tenderly. Aunt Mimi is portrayed as a staid, emotionally repressed, snobbish and yet dependable figure in Lennon's life while Julia ably played by Anne-Marie Duff comes across as fun-loving but vulnerable. The actor who played Lennon, Aaron Johnson, bears only a slight physical resemblance to him but he convincingly conveys some of the torment and anger that coloured Lennon's youth.
Do you remember when the great white shark first rose from the sea in "Jaws"? The whole cinema jumped. There was a similar moment in this film when quite unexpectedly Julia is killed by a car. I listened to myself gasp with horror even though I knew that such a moment would occur somewhere in the film.
The movie's backdrop is nineteen fifties England with its austere postwar climate but also with a growing sense of emergent youth cultures such as the teddy boys. Young people are starting to define themselves in new terms and The Beatles are in the right place at the right time - ready to provide their restless generation with anthems to rally around.
I guess it was in the early eighties when my friend Tony and I travelled from Sheffield on a "Beatles Magical Mystery" coach excursion. We saw Aunt Mimi's house, some of the places where Paul McCartney's family had lived, the grand house with its surrounding trees known as Strawberry Field, the site of The Cavern Club, the bus shelter at the top of Penny Lane, Liverpool Art College where John and Stuart Sutcliffe were students and the job centre in Speke where, at the time, rejected Beatles drummer Pete Best was working. Not only did "Nowhere Boy" bring memories of that great day out back to mind but it also successfully showed the family circumstances which were fundamental in shaping Lennon's ambitions and his talent.
Surprisingly, songs and music never overwhelm the dramatic human story in this film but I would have liked it to end with Lennon's plaintive song to his late mother who meant so very much to him even though she had let him down so badly...
Half of what I say is meaningless
But I say it just to reach you
Julia Julia Julia
Ocean child
Calls me
So I sing a song of love
Julia Julia
Seashell eyes
Windy smile
So I sing a song of love
Julia Julia
- January 07, 2010