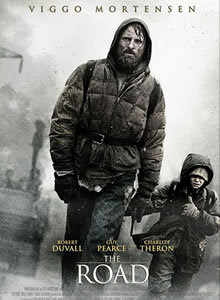 I grinned inanely when I saw it in "The Showroom" programme for January. Did they really mean me? Am I really that old? On Thursday mornings, they were offering people aged over fifty five the opportunity to attend an early film showing plus a coffee and a piece of cake in the bar - all for a mere £4. Today's film was "The Road" (2009) directed by John Hillcoat.

So I took to the "road" and left our house at 9.30, striding out down Ecclesall "Road" and all the way into the city centre - 2.6 miles to be precise. The Showroom was teeming with over fifty-fives - all of them looking old enough to be my parents! Did I miscount the years somewhere along the line or had I entered a time warp? Or I'm the new Dorian Gray!

Anyway - the film. I thought it was brilliant. I accepted it for what it was having never read Cormac McCarthy's novel of the same name. By all accounts, it's a brilliantly disturbing book that is both desolate and, in parts, horrifying.
What I saw was a post-apocalyptic struggle to survive. No sunshine. No colour. Only vestiges of the world we inhabit remained - abandoned petrol stations, stripped supermarkets, decaying roads. Civilisation was well on the way to total evaporation with gangs of marauding cannibals scouring the countryside for prey. "The good guys" were hard to find.
Travelling south through all this ugliness and desperation are a man and a boy. The man is played by Viggo Mortensen and the boy by Kodi Smit-McPhee. I couldn't fault them - fantastically convincing performances and both roles called for enormous emotional commitment and understatement.
At the end of the film, the man is dead but on a windswept beach the boy finds a ragamuffin family to help him along the next stretch of "road". It's a hopeful message in a film that is so bleak.
It all somehow reminded me of Samuel Becket's existential "The Endgame" and "Waiting for Godot" with a sprinkling of "The Book of Dave" by Will Self and King Lear on the heath. Visions of a world stripped bare - "Nobody comes. Nobody goes." Yet ultimately, I don't see "The Road" as a vision of some hopeless future nor do I see it as a parable for mankind - a sort of warning shot across our globally warmed bows. It's just a story - an imagined story of a father and his son - travelling on through a nightmare world - trying to reach somewhere better and trying to hang on to their core decency and hope. It's all in the eyes of the beholder but for me this was a superb five-star film and so I recommend it to you.
Afterwards, I walked home along "the road", stopping at the Moorfoot Fisheries for fish and chips in the rear seating area. The whirlwind of a waitress pointed at the laminated "Pensioner's Special" notices. "I'm not that old!" I half snarled. "Oh no, I didn't mean that love," she said. "Anybody can have it". And so for £3.70 I enjoyed fish and chips with the obligatory mushy peas, a slice of bread and butter and a pot of tea. I guess I must be the last of the big spenders!
- January 21, 2010