Sorry. I bet regular visitors to this blog will have imagined that I had ceased harping on about Easter Island. Wrong. It's still in my thoughts a lot and I am currently reading "The Enigmas of Easter Island"(2003) by John Flenley and Paul Bahn. Fascinating new speculations rooted in available evidence.

When I was on the island, I began scribbling a journal which until today I hadn't looked at since I got back. After years of battering away at computer keyboards, I had almost forgotten the rather different and somehow more intimate process of handwriting at length. I filled a notebook hardbound with a Jacquard silk design that a science teacher in my old school had given me on the day I left. Thank you Barbara.
And another apology. Regular visitors may recall that occasionally I will break out into poetry. I have seen several psychoanalysts about this, even tried electric shock therapy but it's an urge I just can't control. I successfully suppress it for weeks and then it floats back to the surface like a rubber duck in a bubble bath. The trip to Easter Island - Te Pito te Henua (The Navel of the World) - inspired me to scribble several poems in my journal and here's one of them. I wrote it on the five hour LAN flight back to Chile:-
Hanga Roa
In Hanga Roa panting dogs
Pursue a bitch in season
By the supermercado
And Tavake's bar
As a moped whines past
Pursued by a silver-starlight four by four
Made in Japan
Once the moai makers
Walked here
Marveling at the dying of days
And these vast night skies
Pricked with uncountable
Platinum peepholes
To the other world
By fires of toromiro branches
They respun old stories
Of their island-world and
Of the endless sea and the enveloping sky
As the moai cast
Elongated moonlight shadows
Over their ancient ahu
Those dogs scurry off
Behind the Hotel Orongo
You can hear the Kare Kare dancers
From Tahiti
Their harmonies tangling
With the pack's expectant barking
As lights from the east
Predict another LAN arrival
From Chile faraway. 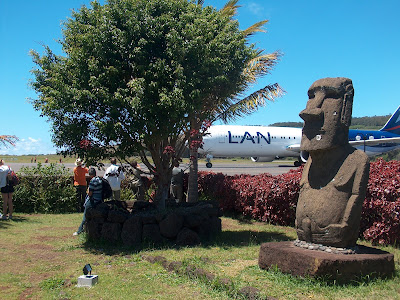