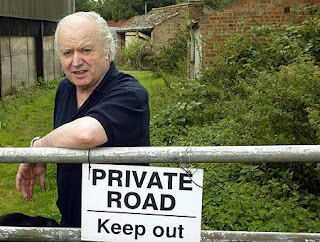 Popular culture might insist that we should all have heroes. To tell you the truth, I am not hot on the idea of heroes. If pushed, apart from my family and friends, I'd say that for me there's the legendary Bob Dylan, there's Dean Windass the former Hull City AFC striker and there's Tony Martin. They are my heroes. But I hear you saying - Tony who?
In August 1999, Tony Martin heard intruders downstairs in his isolated Norfolk farmhouse. Emneth Hungate Farm was a ramshackle place and eccentric bachelor Martin lived a disorganised sort of life there miles from anywhere. He had been visited by burglars before, including the two "travellers" who arrived that night. Frightened and angry, Martin grabbed his shotgun, crept downstairs and soon afterwards blasted the pair of them. The youngest - Barras - aged just sixteen - was shot in the back and died at the scene. The older one - Fearon - was permanently "disabled" - Martin shot the guy's "crown jewels"!
Anyway - and I still find this incredible - Tony Martin was sentenced to three years in jail. The judge concluded that he went beyond the boundaries of reasonable force and had no right to take the law into his own hands like that. What is more, though he was a model prisoner, he was not considered for early release because he refused to show any remorse for his actions that August night. Instead of being sent to jail, I still believe that Tony Martin should have been presented with a medal at Buckingham Palace for services to the community and for being brave enough to fight back.
Another case has recently received a fair amount of news coverage. Back in September 2008, Mr Munir Hussain was returning from his local mosque in High Wycombe with his family. As soon as they stepped over the threshold of their home, they were confronted by three burglars in balaclavas. These guys tied Munir and his family up and made them crawl from room to room as they ransacked the house looking for valuables. Munir and his brother managed to untie themselves almost as soon as the gang departed.
They chased them down the street and cornered Walid Salem whereupon they beat him. Munir hit him so hard with a cricket bat that it broke. The career burglar with a criminal history as long as your arm is now allegedly "permanently brain damaged" but he continues to commit crimes in his area. He was not jailed for his crime at the Hussains' home. Munir was sentenced to thirty months in jail and his brother Tokeer received thirty nine months. At first my instinct was to bracket the Hussain brothers with Tony Martin - heroes - but in spite of myself, I tend to agree with the judge that their brutal revenge attack probably went too far.
Nonetheless, in the end we need to ask ourselves what we would do if we came across intruders in our own homes. Natural justice would tell most of us to fight back, to defend our loved ones and our property, to teach the feckless self-seeking intruders a lesson they would never forget. If put in the same situation as Munir Hussain, perhaps I would have given chase and bashed Walid Salem's brains out. In the heat of the moment you never know how you might react. It would be difficult to take a backward step and think coolly about how best to respond. What would the two judges in these cases have done if Barras and Fearon or Walid Salem had crept across the gravel, past the dove cotes and the double garages, to enter their palatial homes? 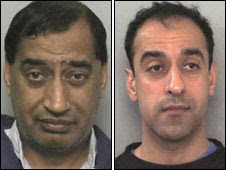