What a difference a day makes! Yesterday the BBC News headline was "Burglar Attack Appeal Fails" - describing how the Court of Appeal had thrown out Munir Hussain's appeal for a rethink on his thirty month sentence. Today the headline is "Jailed Businessman Munir Hussain Freed by Court" and the story describes how the same Court of Appeal has decided both to reduce the jail sentence to twelve months and to have it suspended. Eh?

Outside the court earlier today, Munir's relieved twenty three year old son Anwais recalled the fateful evening: - “It was indescribable. Unless you've been through it you can't imagine what it was like. You relive it every day – I don't think any of us are really going to get over it. It was everything that you see in the movies that you think will never happen to you. Even now I find it hard to sleep. I don't think our family will really get over it. "
By all accounts, Munir Hussain had been a model citizen until the night the burglars struck. A family man running a local business, he had never been in trouble with the law before. On the contrary, he was a fairly devout Muslim - a regular attendee at his local mosque who guided his children to live decent lives. Currently his family live in a state of some trepidation as the burglars and their associates have repeatedly threatened revenge for the retaliatory assault on Walid Salem.
Munir's brother Tokeer had his sentence reduced to twenty four months. It seems that he was the dominant assailant as the brothers fought back against the criminal scum who had invaded their lives and traumatised their family. 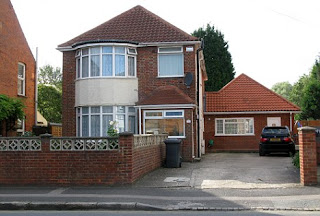 The Hussains' home in High Wycombe