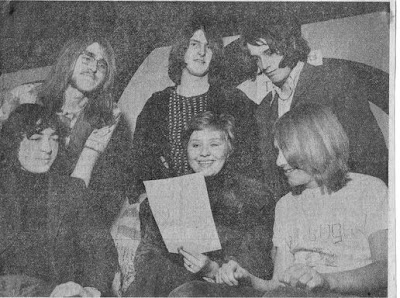 Village? That was the name of the rock band I was in between 1970 and 1972. I was the lead singer. We played many gigs - mostly in East Yorkshire. Youth clubs, village dances, school dances, working men's clubs, back rooms of pubs. We were helped by the youth club leader in  my village - Tom Harrison. He became our manager and had great powers of persuasion.

In fact, the newspaper photograph above was taken at the village youth club where for promotion purposes we met the Scottish popstar Lulu. She's there in the middle between our drummer Colin Wood, and Alan Benson, our bassist. At the back you see our rhythm guitarist - John Brocklebank on the left, seventeen year old me in the middle and our wizard lead guitarist Jock Hornby on the right. I was the only one who had stayed on at school to do A levels. The others had all left Hornsea Secondary Modern at fifteen and had daytime jobs that involved working with their hands - proper jobs in other words.

Our sets consisted of a mixture of old favourites given the Village treatment - "Black Night", "I Heard It Through the Grapevine", "Summertime Blues", "All Along the Watchtower", "Alright Now" etc. and original numbers that Jock and I had worked on together before trying them out with the rest of the band. He brought the melody and I brought the words.

Back then, I just loved it up there on the stage. I never felt nervous - confident in my own ability as a rock singer and in the musicality of the other lads. Yes - there was an element of ego-tripping about it all but so what? Where ever we went we were appreciated. In the excitement at one particular village hall gig, a mass brawl erupted in front of us and we had to cower  backstage till the storm had died down and the main perpetrators had been ejected.

The others were keen to give up their jobs and go professional. There were plans for a record deal and for a summer residency in a Swedish holiday centre. It was all going swimmingly and then I dropped the bombshell  that I'd be leaving to become a volunteer teacher in Fiji. Tom Harrison was not a happy bunny. Maybe he saw himself as the new Brian Epstein.

Of course, I have often wondered what might have been if I'd stuck with the band and turned my back on the unique teaching opportunity I had been given. Like most ordinary young people in those far off days, I'd never been on an aeroplane before. I'll be fifty nine later this year but I'm only now starting to accept that the rock star career I once dreamt of will never happen. It's over, gone.
- May 19, 2012